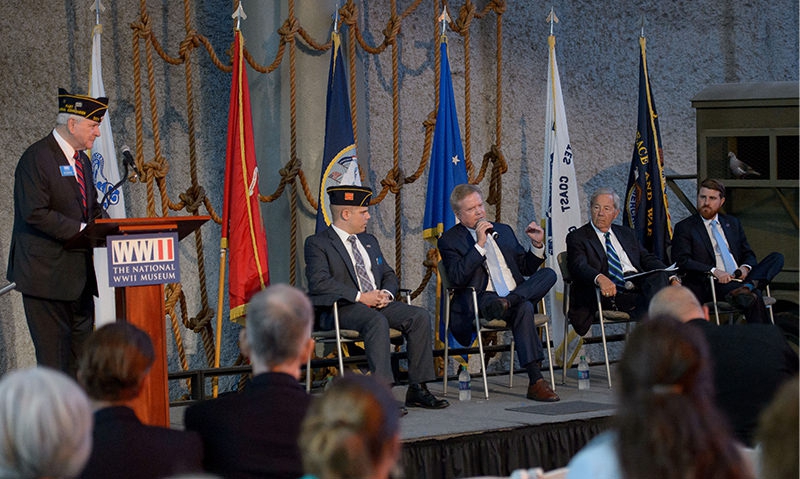 Former U.S. Sen, James Webb speaks during a panel discussion at The National WWII Museum in New Orleans on June 20, 2017.

The author of the Post 9/11 Veterans Educational Assistance Act of 2008, former U.S. Sen. James Webb, found himself in the same company as two granddaughters of American Legion Past National Commander Harry W. Colmery, architect of the Servicemen’s Readjustment Act of 1944, Tuesday evening at The National WWII Museum in New Orleans. In a moderated panel discussion titled “The GI Bill: Then and Now,” many more connections would be made between the two historic measures that became law over six decades apart.

Approximately 200 attendees made their way through the initial outbursts of Tropical Storm Cindy to participate in the event which opened a special six-month American Legion centennial presence at the museum. On display are the original cover and signature pages of the Servicemen’s Readjustment Act of 1944, on loan from the National Archives, and the typed speech, with handwritten editing marks, given by President Franklin D. Roosevelt on June 22, 1944, after he signed the act into law.

The exhibit also features illustrated panels and touchscreen videos that tell the story of the GI Bill, from the situation in 1943 when tens of thousands of disabled GIs were returning to their home communities in need of support to the post-9/11 rendition that provides education benefits and other opportunities for 21st century veterans. The exhibit also documents the massive effects of the GI Bill on the U.S. economy, national security and establishment of an all-volunteer military.

Webb, a highly decorated Vietnam War Marine Corps officer and former Secretary of the U.S. Navy, told the crowd why he made a reboot of the GI Bill his top priority after he was elected to the Senate in 2007. “With respect to the GI Bill and legacy of it, the first thing to remember is that, although it was continuous concept, it has not been a continuous piece of legislation,” he said, explaining how the package had lost some of its value both to veterans and to the U.S. economy in the decades leading up to the bill he introduced on his first day in office and then adjusted with assistance from The American Legion and other veterans groups.

“I looked at this, both as a veteran and as the father a young Marine in Iraq, and I started saying, if you’re going to call these people the next greatest generation, you should give them the same opportunity for a future that the greatest generation had,” Webb said. “Pay their tuition. Buy their books and give them a monthly stipend.”

His intention was to restore some of the fundamental features that helped the original GI Bill transform the U.S. economy, culture and military. By making the benefits package more generous, and bring it into step with 21st century higher education, Webb mirrored what Colmery and The American Legion pursued for the World War II generation.

And while the overall number of post-9/11 veterans today does not compare with the 16 million who served during World War II, the education program’s popularity is soaring, Coy explained. “Eight or nine years ago, we had 37,000 people going to school on the GI Bill,” he said. “Fast forward, and just last year alone, we had 790,000 people use the GI Bill.”

Coy, who oversees VA education and home loan programs under the Veterans Benefits Administration, explained that online tools, improved benefits for the children of post-9/11 generation and a commitment to education and promotion about the GI Bill have been vital to its growth. “There’s been a whole evolution,” Coy said.

Lyon said nearly half of America’s young veterans are using their GI Bill benefits for college, and they are outperforming other students in the classroom, as well. “Our generation, like our brothers and sisters before us, is incredibly resilient and performing extremely well,” he said, noting that the U.S. Army is hitting its highest recruitment quotas in 15 years largely because of the GI Bill. “A very high percentage – over 80 percent – cite the opportunity for an education, post military service, as one of their primary motivators.

“What we have found further is that two-thirds of that population are just like myself, first-generation college students – the first members of our families to achieve that part of the American dream – an education. Prior to World War II, about 7 percent of Americans who were college age had a bachelor’s degree or higher education. Essentially, if your father didn’t go to college, or you weren’t a white male, there was a very slim chance you would have an opportunity at higher education. The Servicemen’s Readjustment Act of 1944 fundamentally changed that. It democratized higher education and quite literally built the American middle class, educating 7.8 million veterans. Today, what we are seeing is rather remarkable because the trends hold true.”

Lyon said post-9/11 veterans using their GI Bill benefits are achieving 3.34 grade point averages compared to the overall student population average GPA of 2.94. “Quite literally, we are among the most successful students in higher education. The top three majors that we are pursuing are business, STEM and health-related – arguably the most marketable degrees in the U.S. today and vital to the success of the future of our economy.”

Lyon added that a high percentage of student veterans are also assuming leadership roles and are actively engaged in service efforts on the nation’s campuses.

In that way, according to Kamin of The American Legion, the post-9/11 veterans match what the World War II veterans proved after the original GI Bill was enacted and fears arose that veterans would create “…hobo campuses. What they discovered instead was that veterans were the best students they had.”

And with both bills, Kamin explained, more important than graduation rates and economic impacts is the simple recognition that the GI Bill shows veterans that the nation appreciates their service. “Servicemembers were coming home to a country that was saying, ‘We believe in you.’ That, to me, was the greatest impact of the GI Bill.”

Mina Steen and Breese Tomick, granddaughters of Colmery, said the original architect of the measure couldn’t have agreed more. “The honor goes to keeping the story alive of the potential of veterans,” Steen said during the audience remarks portion of the event. “I can tell you he would be very happy about that today.”

American Legion Executive Director Verna Jones told the crowd that education benefits are always in need of review and adjustment. She explained that the Legion is actively working with the SVA and other groups, as well as VA and Congress, to improve benefits for reservists called to active duty and to protect veterans whose for-profit schools close during their GI Bill-funded educations.

The exhibit is built to travel to other venues around the country to help The American Legion tell its centennial story. “As an achievement to highlight heading into our centennial celebration, it’s important to consider that the GI Bill connects the dots from our founding World War I generation to the post-9/11 veterans who use the benefit today,” Jones said. “The GI Bill must (always) poise veterans for success after service in the U.S. armed forces.”