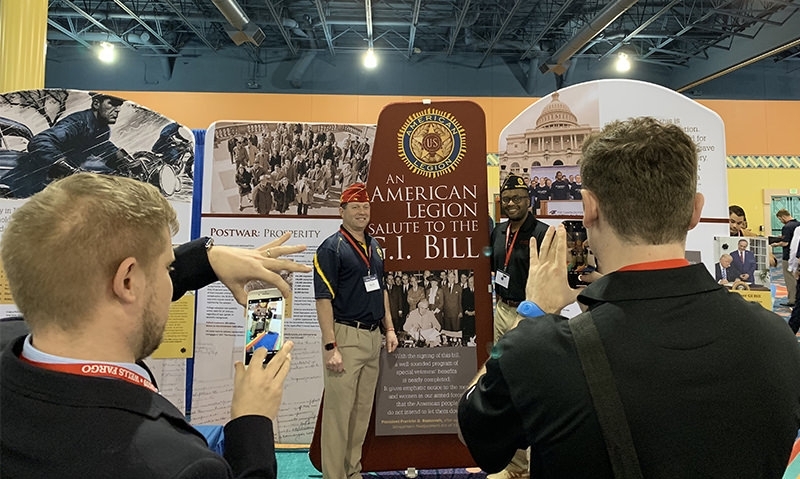 Nearly 2,500 student veterans descended on Disney’s Coronado Springs Resort January 3-5 for the Student Veterans of America (SVA) National Conference, and among them were many students who were Legionnaires.

The American Legion National Headquarters was also well-represented by numerous staffers, including National Judge Advocate Kevin Bartlett and John Kamin, assistant director in the Veterans Employment & Education Division (VE&E) in Washington, D.C. Bartlett also addressed attendees at their awards banquet on Jan. 5. The keynote speakers for the awards banquet were Medal of Honor recipients Kyle White and Ryan Pitts, both Legionnaires who have presented the Spirit of Service awards at The American Legion National Convention.

In his comments at the banquet, Bartlett noted that today’s veterans owed a lot to earlier veterans who had “envisioned a future that would long outlive them … of fair and beneficial support, regardless of gender, ethnicity or pedigree, because they knew that if given a chance, veterans would make America stronger.

Bartlett also called on those present to pick up the mantle of leadership and advocacy, a recurring theme for the conference which had the motto of “Warrior – Scholar – Leader.”

“As The American Legion celebrates its centennial this year, if you do nothing more, I am asking you to recognize the vision of the men and women who came before us,” Bartlett said. “They designed the future we now enjoy. It is our turn now to design one for generations of U.S. military veterans yet to be born, whose identity must be maintained and strengthened, for the good of everyone. Our predecessors had educations to achieve, careers to start and an economy to grow – as we do. But they also made time to advocate on behalf of each other and values forged in service, firm in the belief that when veterans stand united, are treated with respect and are given the chance to succeed, they make America stronger.”

Bartlett, Kamin and others manned a large booth prominently placed in the conference’s Exposition Hall that touted the success of the original The Servicemen's Readjustment Act of 1944 (“GI Bill”) and the recently signed Harry W. Colmery Veterans Educational Assistance Act (“Forever GI Bill”). Included in the display were an original pen used by President Franklin D. Roosevelt to sign the GI Bill and a copy of the Forever GI Bill signed by President Trump.

In between general assemblies that included addresses by White, Pitts, SVA President Jared Lyon and Department of Veterans Affairs Secretary Robert Wilkie, the conference also included a number of breakout sessions. These sessions dealt with all facets of student life, adjusting to a post-military career, advocating for veterans and running an SVA chapter. One such breakout session was titled “Veteran Service Organizations: A Legacy of Service” hosted by SVA Vice President of Government Affairs Lauren Augustine and including representatives from several other veterans service organizations, in addition to Kamin.

“We work hand-in-hand with every group up here, and they were all instrumental in helping support Forever GI Bill and many, many other benefits that SVA as an advocacy group actually doesn’t touch – things like health care and benefits delivery,” Augustine said. “And they do tremendous work on behalf of the millions of veterans across this country, and I really wanted to provide an opportunity for us to engage on that and to share this story.”

On the panel, The American Legion’s Kamin noted that the principles that guided the founding of the organization continue on to today. “For World War I veterans, Teddy Roosevelt and others got together and said ‘this fighting, this misery has to mean something, this service has to count and we should consecrate this veterans organization on those principles,’” he said. “And so there were our Four Pillars – Veterans Affairs and Rehabilitation, National Security, Americanism and Children and Youth – and essentially it said ‘your service matters now that you are back, and you need to dedicate yourself to making the country greater.’”

Kamin also detailed all the services that the Legion can provide that many veterans are unaware of, from processing claims, to working the halls of Congress, to helping students with any problems with the GI Bill. Kamin also thanked those in attendance for allowing him to tell the Legion’s story.

Bartlett also expressed how grateful he was to be given the opportunity to address the conference, saying, “It is indeed an honor, because it doesn’t seem that long ago when I was a student veteran like you… home from the Navy, unsure how the future would unfold, certain that I could make a difference, as I hope I did in uniform.”