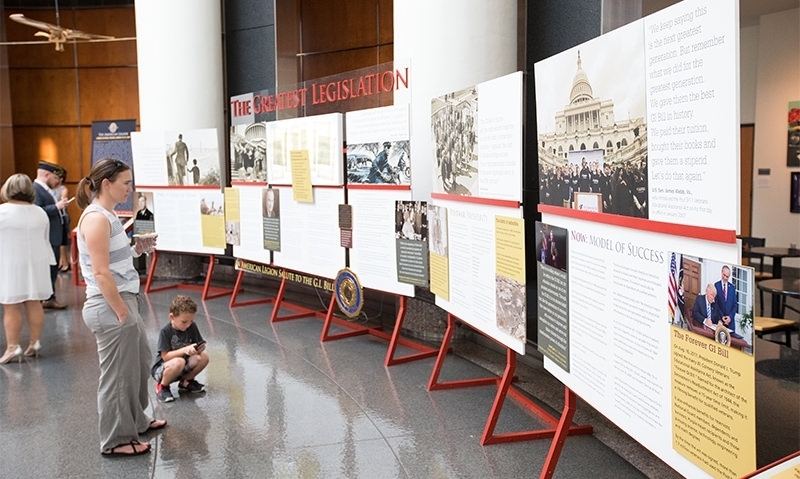 The Department of Georgia’s 12th District will host The American Legion’s traveling GI Bill exhibit from Feb. 16 through March 12.

“The Greatest Legislation: An American Legion Centennial Salute to the GI Bill,” will be on display for the public at the Satilla Regional Library, 200 S. Madison Avenue, Douglas, Ga. The display will be located in the library’s Genealogy Room. Hours of operation are Mon.-Thurs., 10 a.m. to 6 p.m.; Friday, 10 a.m. to 4 p.m.; and Saturday, 10 a.m. to 2 p.m.

However, the original legislation nearly failed in June 1944 when a conference committee was deadlocked on a 3-3 vote until American Legion leaders led a frantic search for Rep. John Gibson of Douglas, Ga., who represented the swing vote to pull the Servicemen’s Readjustment Act out of committee. Gibson, who was rushed from rural Georgia through a rainstorm in the middle of the night to cast the swing vote, is rightfully remembered as an essential figure in the bill’s passage.

The GI Bill exhibit features illustrated panels, video kiosks and artifacts that show the dramatic story of the Servicemen’s Readjustment Act of 1944, the massive effects it had on U.S. society and the ongoing effort to continue improving it for new generations, through to the passage of the Harry W. Colmery Veterans Educational Assistance Act of 2017 – the “Forever GI Bill.”

The exhibit has been touring the country since its debut in June 2017 at the National World War II Museum in New Orleans. It has also been on exhibit at the George H.W. Bush Presidential Library and Museum in College Station, Texas; two Student Veterans of America national conferences; Bob Hope Patriotic Hall in Los Angeles; the Montana Military Museum in Helena, Mont..; the Iowa Gold Star Museum at Camp Dodge, Iowa; the 100th National Convention in Minneapolis; and the Student Veterans of America National Conference in Florida.