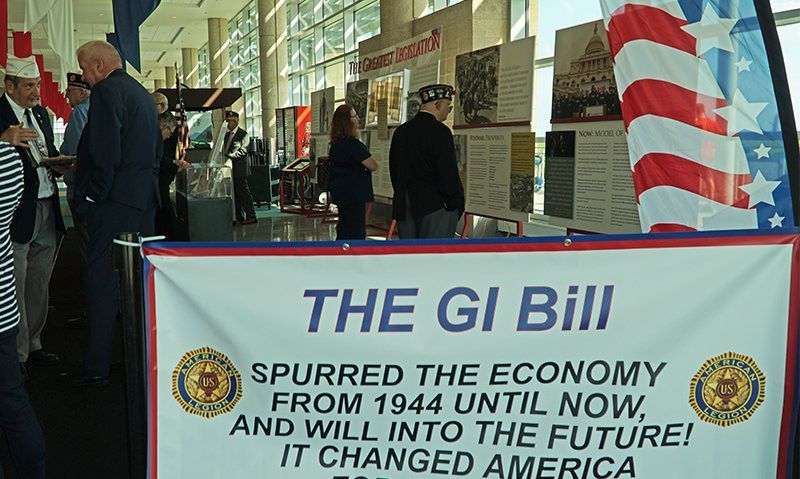 Visitors take in "The Greatest Legislation: An American Legion Salute to the GI Bill" exhibit during the opening ceremony at the New Jersey department convention. Photo by Holly K. Soria

An American Legion department that prides itself in bridging the gap between military service and civilian career success welcomed “The Greatest Legislation: An American Legion Centennial Salute to the GI Bill” traveling exhibit Thursday for its summer convention.

American Legion National Commander Brett Reistad participated in the Department of New Jersey event that reflected on the history and ongoing vitality of the GI Bill, the first version of which was drafted and pushed to passage 75 years ago as the Servicemen’s Readjustment Act of 1944.

“Veterans weren’t looking for handouts – nor were they looking to be considered a special class,” Reistad told the crowd in an opening ceremony. “Veterans just wanted a shot at the American dream that they fought so hard to defend.”

The multi-media exhibit produced by the Legion’s 100th Anniversary Observance Committee has toured the nation since June 2017, sharing the story of the GI Bill – conditions leading up to its emergence, the blue-ribbon American Legion team that drafted it, the nationwide campaign to build support for it, the dramatic effort to bring the legislation out of a deadlocked congressional committee for signing by President Franklin D. Roosevelt, the half-century of economic impact it made and the continuous need to update it and improve it for new generations.

Speakers at the ceremony included a VA health-care system director, a university vice president and representatives of two members of Congress.

Fresh off his trip to Normandy, France, where The American Legion commemorated the 75th anniversary of the D-Day invasion that began the liberation of Europe in World War II, Reistad reflected on the price U.S. military personnel have paid for the portfolio of opportunities they have under the GI Bill.

“They paid, and continue to pay, for the GI Bill through sleepless nights induced by post-traumatic stress, through grafted skin put together after rocket attacks, through aching backs incurred after years of heavy packs and infantry gear. The truth is, our founders understood the horrors of war as soon as they experienced World War I. But others required some reminding.”

Reistad and others spoke of early resistance – from some members of Congress, higher education officials and even a few other veterans groups – to the Servicemen’s Readjustment Act of 1944. Even President Roosevelt, who would sign the legislation into law in June that year, was an early skeptic.

All critics were proven wrong, Reistad said. “Not only was this initial investment a cost of war – in other words, payment to those who gave so much – but it paled in comparison to the higher tax revenue gained from an educated working class and a housing boom that came as a result of millions of new homeowners, courtesy of the GI Bill. This is why I keep referring to the GI Bill as an investment rather than a benefit or a welfare program. It was an investment that paid off big-time.”

He noted that by the mid-1950s, one third of U.S. housing starts were funded by GI Bill financing.

He also reminded attendees of another milestone this month – the 50th anniversary of the first moonwalk. “Not surprisingly, many of the NASA astronauts, scientists, business and political leaders who made it possible were educated by the GI Bill.”

As the years passed, the education benefit for veterans gradually diminished, he explained, setting the stage for the Post 9/11 GI Bill, passed in 2008, a major overhaul that modernized and improved the package. Since then, The American Legion has worked with Congress and VA to continue improving it and will continue to do so, Reistad said. “Just like The American Legion created the original GI Bill, we will fight to ensure the GI Bill indeed lasts forever and that the benefits are worthy of the GI Bill name. This is why we have an American Legion. This is what we fight for. That is who we are.”

John Kamin, a U.S. Army Reserve staff sergeant and American Legion national policy associate on the GI Bill, acknowledged the role VA plays in the fulfillment of the GI Bill promise. “We are well aware, just as we were in 1944, that although we were critical in drafting these concepts, it is a competent VA that brings them into being.”

And beyond the well-documented economic benefits of the GI Bill, something more occurred, Kamin said. “Servicemembers were coming home to a country that was saying, ‘We believe in you.’ That was the first time in history that really happened. It fostered a faith between citizens and government. Veterans deserving this was predicated on their willingness to serve America, and America reciprocated. When we have that faith in government – when benefits matter and we are able to prove that they matter, by our individual acts – it builds harmony, not just with public officials that we trust but with each other … greater community bonds. I think that’s the true legacy of the GI Bill and the true charge it gives to us, to give to our generation and future generations to prove our country’s faith in them to make our country better.”

Jeff Sagnip Hollendonner, district director for former House Committee on Veterans’ Affairs Chairman U.S. Rep. Christopher Smith, D-N.J., told the crowd that “Congressman Smith feels (the GI Bill) is perhaps the most successful program ever launched by the federal government. It helped create the modern middle class that did not exist before. And it serves as the Armed Forces’ top recruiting tool in an era where we have an all-volunteer force.”

A letter from U.S. Rep. Donald Norcross, D-N.J., echoed Smith’s message. “It wouldn’t have happened without your organization,” he wrote of the GI Bill. “Shockingly, it was an uphill battle. But The American Legion and its members did not get deterred. With great vision and a sense of responsibility to their brothers and sisters at war, the Legion was successful at changing the course of history for our veterans and our country. Since 1944, the GI Bill has helped millions of veterans pay for college, graduate school and other training programs. This monumental legislation has exceeded all expectations and created opportunity for generations of servicemembers.”

Wilmington VA Medical Center Director Vince Kane told the group that because his father was a World War II veteran who used the GI Bill, opportunities were created for him. “I wouldn’t be here without the GI Bill. We wouldn’t have had what we had without the GI Bill. The greatest legislation happened because we had the greatest generation. It was a tool that allowed them to lead our country in a totally new, different and vitalized direction. We would not be here today without this bill.”

He said it’s important to continue to support military service and veterans of the future who can use their experiences and opportunities to drive the nation forward. “As a community, as neighbors and families, we need to make sure that we’re training the next generation to be the leaders that this nation needs. That is what the GI Bill is about. The best benefit of the GI Bill is what it’s done for the generations to come. We can never repay their debt, but if we work together, we can ensure they are that generation that makes the next generation better.”

Stockton University Vice President E. Michael Angula said student veterans on his campus make a positive impact on all others. “No one stands up more for liberty, freedom and the ability of under-represented individuals and immigrants coming to our country in pursuit of a better life – the American dream. Our military service organization students participate, encourage and support these groups in a way that makes us so proud. They value the Constitution. They value the ethics of our founding fathers and the principles of justice equality. The GI Bill opened doors for veterans, regardless of gender, regardless of race, and that really helped create the middle class that made that generation the greatest we have seen.”

The American Legion’s GI Bill exhibit will continue to travel the nation throughout the organization’s centennial year.