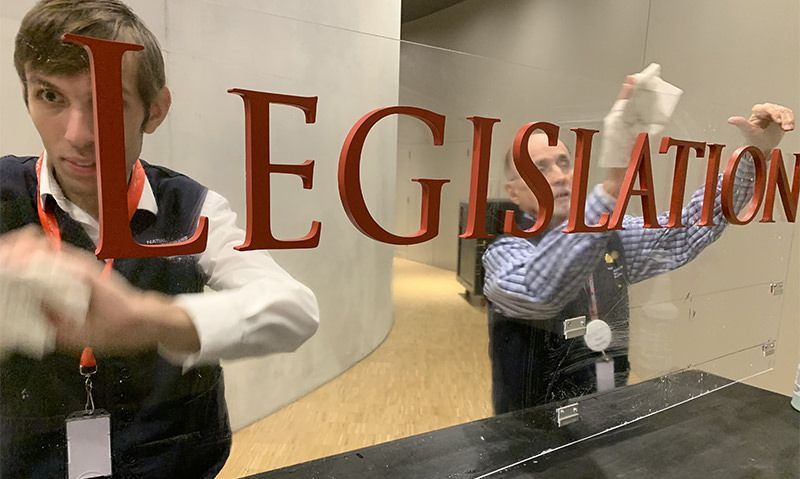 Volunteers at the National Veterans Memorial and Museum in Columbus, Ohio, help set up "The Greatest Legislation: An American Legion Salute to the GI Bill" exhibit. Photo by Jeff Stoffer

The American Legion’s traveling GI Bill exhibit will be on display at the National Veterans Memorial and Museum in Columbus, Ohio.

“The Greatest Legislation: An American Legion Centennial Salute to the GI Bill” will be available for the public to view from Nov. 1 to Dec. 8 at the museum, located at 300 West Broad St., Columbus. The museum is opened Wednesday-Sunday, 10 a.m. to 5 p.m., and closed Monday and Tuesday. Visit the National Veterans Memorial and Museum website at https://nationalvmm.org/.

The exhibit has been touring the country since its debut in June 2017 at the National World War II Museum in New Orleans. It has also been on exhibit at the George H.W. Bush Presidential Library and Museum in College Station, Texas; two Student Veterans of America national conferences; Bob Hope Patriotic Hall in Los Angeles; the Montana Military Museum in Helena, Mont..; the Iowa Gold Star Museum at Camp Dodge, Iowa; the 100th National Convention in Minneapolis; Department of New Jersey convention; the Intrepid Museum in New York City as part of Fleet Week; at the Indiana State Capitol for the 101st National Convention in Indianapolis; and most recently at the at the Morton Museum of Collierville History in Tennessee.