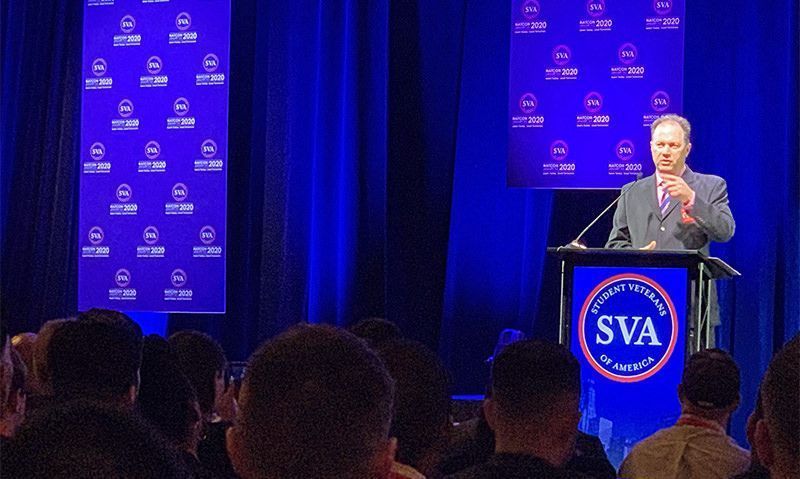 Members of The American Legion Media and Communications Division also staffed a large booth and displayed an exhibit telling the story of the Servicemen’s Readjustment Act of 1944, commonly known as the GI Bill, the first version of the education benefits package most of the student veterans at the conference are now using. Since drafting the original GI Bill, The American Legion has fought for improvements and continues to do so, most recently through passage of the Harry W. Colmery Veterans Educational Assistance Act of 2017, the “Forever GI Bill,” named in honor of the American Legion past national commander considered the architect of the original legislation.

Bartlett addressed attendees during their main session Jan. 5, which also included remarks from Department of Veterans Affairs Secretary Robert Wilkie and 2016 Miss USA winner Deshauna Barber. Barber was the first former soldier to earn the title of Miss USA and during her reign spoke often about post-traumatic stress disorder (PTSD) and the challenges faced by numerous relocations. Barber is currently a captain in the Army Reserve and works as a cadet instructor at Howard University.

“When I joined the American Legion, I did so because my grandfather was a World War I guy,” Bartlett told hundreds of students during one of the general sessions. “He helped form the Legion in Michigan where I’m from. Now one of the things that we like to talk about is the GI Bill, and how in 1944 we went after that piece of legislation and helped get it passed so that all of you can go to school, get loans, do all these wonderful things.”

But for Bartlett, now is the time to focus on the future – the “why” and “what for” – of each student, he explained, relating it back to the mission and purpose from time in service. He also noted that The American Legion’s White Paper on Suicide identified four root causes of suicidal ideation: PTSD, traumatic brain injury, loss of a sense of purpose and loss of a sense of belonging. While noting that the first two are beyond the control of The American Legion, being an active member and participant in the veterans community can help with the latter two.

“You really need to think about what your mission and purpose is,” Bartlett said. “And that is one thing that the veterans service organizations – The American Legion, the VFW and other organizations – bring to the table. Now, you’re all students, I was a student once, a couple of times. When I graduated, I went to work, and many of you are working while you’re in school. Does that work give you the same mission and purpose that the military gave you? If you are lucky, you can say yes. But I would argue that most people can’t say yes, and for that I’m sorry. My job – I have a mission and purpose – and that’s to help veterans and their families.

“Veterans service organizations offer a mission and purpose: something to do, something to give back. The Legion offers an opportunity to find what your mission is. You want to help people and can’t do it at work? Find your local post, and become a member. Find your purpose.”

The conference also included 96 breakout sessions, dealing with all facets of student life, including adjusting to a post-military career, advocating for veterans and running SVA chapters. One such breakout session was titled “Veteran Service Organizations: A Legacy of Service” which included Kamin as a speaker. Barlet also participated in a session titled “Health Care Professional to Advocate: Using Health Care Degrees in Non-Traditional Roles.”