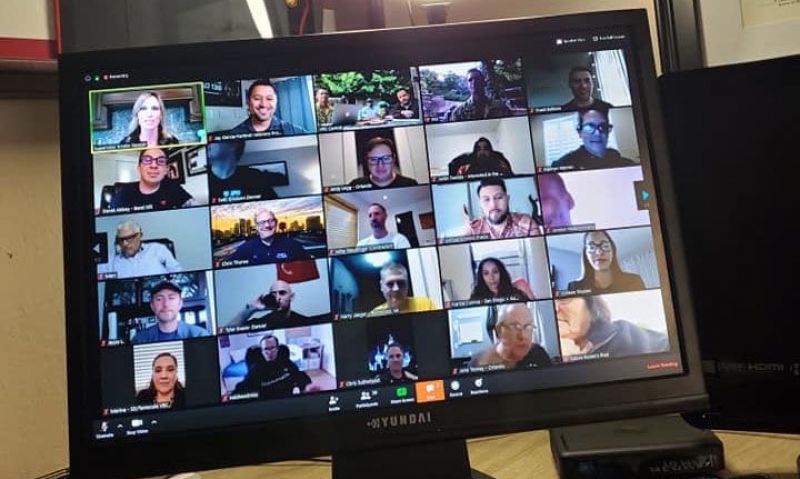 As the coronavirus took hold in the United States, it forced changes in many facets of daily life from business operations to grocery shopping to education opportunities.

At Syracuse University, the Institute for Veterans and Military Families’ Onward to Opportunity (O2O) program was already ahead of many similar programs. O2O is a career training and professional certification program for transitioning servicemembers, veterans, members of the National Guard and reserves, and spouses. The free program, which serves as a linchpin toward in-demand careers, began in 2015 and offered in-person and virtual opportunities.

“We already had a hybrid learning model in place,” said Mike Bianchi, senior director of education and career training at IVMF. “We had in-person classes. That led to an asynchronous learning model where the students went self-paced into a distance learning model to complete their coursework. That is supported by IVMF advisers that help coach them to completion.”

When Bianchi retired from the Army in 2015, the military was in a downsizing mode. There were around 300,000 annually transitioning servicemembers at that time. Meanwhile, the unemployment rate for veterans was around 16 percent.

In October 2015, IVMF and the Schultz Family Foundation launched Onward to Opportunity as a way “to meet the needs of servicemembers and their spouses who were leaving the military who had served their nation,” Bianchi said.

O2O began at Joint Base Lewis McChord (JBLM), outside Seattle. The program has grown to 19 military installations that serve over 70 locations. To date, 37,000 servicemembers have completed their coursework.

The program has not been limited by geography. While it has a footprint at 19 installations, there has always been a virtual aspect. Students have come from all 50 states and U.S. territories, as well as overseas. Each month, roughly 1,000 participants are enrolled in the virtual option.

That made it easy to transition to an all-virtual scenario, first at JBLM in March.

“It was very successful,” Bianchi said. “In fact, all of our cohorts that were being run at a physical location have now been transferred to a virtual one. They were able to pivot and able to take the most significant portions of the curriculum and bring them into a virtual manner to our Blackboard system and still continue with those who are enrolled and those who are in the transition process.”

Participants can choose from more than 40 different career pathways such as IT certification, cybersecurity, and business certifications such as human resources or project management.

Brian Collins is an adviser for O2O, which he joined a year ago after retiring in 2017 from the Army. That year he took O2O’s human resources course at Fort Drum, N.Y., as a way to boost his skillset as he transitioned to the civilian workforce.

“The course helped me understand the challenges that many of our participants struggle with,” Collins said. “For example, trying to complete this coursework while having other competing requirements such as preparing their families to move, looking for employment, housing and other challenges that come with transitioning from the military. As someone that has gone through what they have, I can help them prioritize everything while staying focused on why they are taking this course. It’s sometimes nice for veterans, military spouses, and transitioning servicemembers to know that I have been where they are and understand what they are going through.”

“The course not only helped me personally experience the Learning Management System that our students utilize, but also was a great refresher in handling different situations,” said Perkioniemi, who served in the Army from 2003 to 2016. “Leading and dealing with conflict in the civilian sector is very different than it was in the military.”

Bianchi sees O2O’s role as being complementary to the military’s Transition Assistance Program or TAP, further helping transitioning servicemembers to the workplace. O2O focuses on topics such as career choices, long-term employability, branding and networking.

“We’re doing very well in intervening up front and coaching people on the choices they make and to eliminate the turbulence they are already going to feel in an already difficult time with their transition,” said Bianchi, alluding to the program’s 70 percent retention rate after six months of employment. “We talk about emotional intelligence, corporate culture and having a growth mindset about workplace fluidity.”

Another shift that O2O did as the coronavirus spread was to offer the virtual programming to its 18,000 alumni. They were offered access to training modules while they were teleworking, being furloughed or dealing with the coronavirus another way.

“They can go in and upscale or rescale with any number of the pathways we have in there,” said Bianchi, noting that in just three days, more than 1,700 alumni have requested access. “It’s a big investment to keep those who want this training to keep moving forward.”