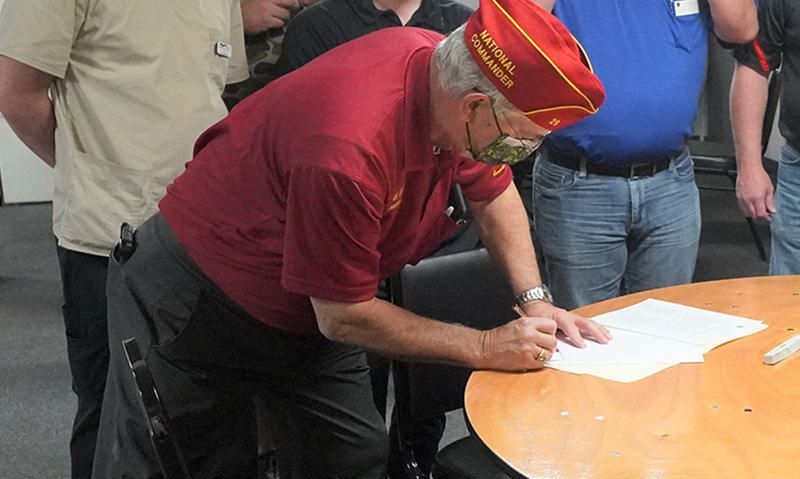 History was made in early November when The American Legion Department of Wyoming chartered its first post on a college campus.

Last fall, Gillette College Veterans Advisor Brian Yeager – at the time a member of American Legion Post 3 near his home in Newcastle, Wyo. – and the campus’ student veterans club submitted a request to start a post at the college.

Yeager, previously an American Legion-trained service officer and a Marine Corps veteran, said he saw a need for the many services The American Legion could provide the veterans in the college’s student body.

“First and foremost, The American Legion brings the absolute best set of services forward for young veterans: the department service office, veterans education representation, veterans vocational rehabilitation – which is going to have a tremendous impact in the coming years,” Yeager said. “In addition to that, it gives veteran a place to embrace their culture and who they are, and it provides them with that culture right here on the same campus where several (other veterans) exist at the same time.”

Tasked with getting enough veterans to sign up and qualify for a charter, Yeager and the others had no trouble doing so. Department of Wyoming Commander Michael Cooke, who with Department Adjutant Jim Lish helped facilitate the post being chartered and attended the charter-signing ceremony, said it took less than two weeks to get the necessary number of veterans wanting to join the post.

“They wanted a place on campus,” Cooke said. “Hanging out with like-minded veterans, doing that kind of stuff. It’s been a snowball going downhill. It’s been a great thing happening.”

Yeager wasn’t surprised how quickly they got the prospective members they needed. “I had gotten quite a bit of interest,” he said. “I had floated the idea through the student population. What I had found, by and large, is they’re very interested in organizations that bring services with them. But not only do they bring services, but they give you an opportunity to give back.

“As we move forward … we’ve already identified several initiatives with this small post that we intend to take up right away. We intend to advocate in our legislative offices … and advocate for our veterans within our community."

While Lish and Cooke were heavily involved in Post 307’s inception, Yeager also praised Wyoming American Legion Department Service Officer Dwight Null for his assistance in getting things up and running.

“Dwight allowed me to maintain my (service officer) accreditation and also encouraged along this path,” Yeager said. “He saw the need as quickly as I did. It was he and I … that put this idea together. His guidance and tutelage were really essential to making all of this transpire.”

Post 307 is named for Weston, Wyo., native Brian Bland, a U.S. Marine who was killed in action in Iraq on Jan. 26, 2005, when the CH-53E helicopter in which he was riding crashed near Rutbah. Twenty-nine Marines and one sailor also were killed.

Yeager said in addition to the 12 names on the charter, another 18 or so applications are waiting to be processed. Post 307 will have its first organizational meeting, including swearing in new officers, after students return to campus Jan. 18.

Oxford, who was making his visit to Wyoming at the time, signed the back of Post 307’s temporary charter during the November ceremony. “He made the comment that it was kind of neat. It was the first (charter signing) he’s been able to witness,” Cooke said. “That was kind of cool.”

Cooke said having a post on a college campus “is extremely important. There’s benefits we’ve all been working for over 100 years that we utilize at college and we utilize for the rest of our lives. They’re able to get with these veterans on the college campus who wouldn’t normally go to a brick-and-mortar post in the town. They’ve got access to these younger veterans and show them there are some benefits they’ve earned that are easily accessible to them.

“We get them to start realizing what they can do and how they can do it, and they start paying it forward. It’s just building the foundation for the future.”