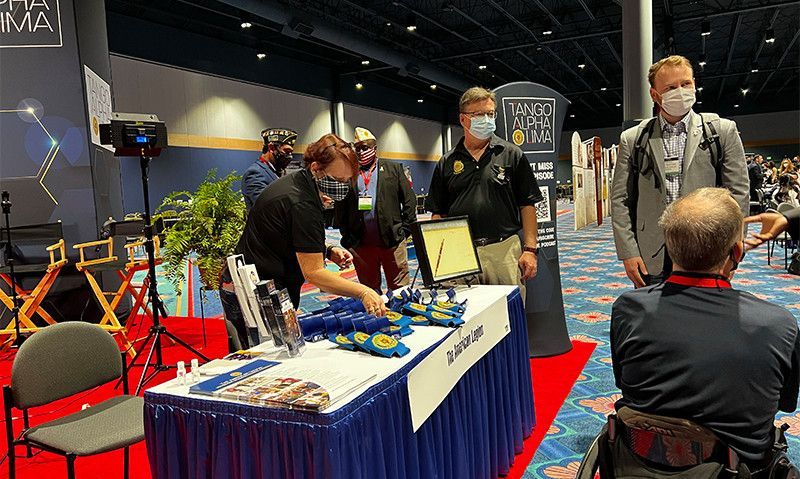 Ashley Gorbulja-Maldonado, a member of American Legion Post 180 in Virginia, presented at several of the breakout sessions. Among those was one about how SVA chapters and American Legion posts can build relationships.

She pointed out how both organizations have a similar grassroots approach. “You will find a genuine post in your community, made up of folks who live there. The common theme is we all come to the table to make things happen, just like you do in your SVA chapter.”

Gorbulja-Maldonado highlighted some of the similarities between Legion posts and SVA chapters, including the leadership structure and community programs. She encouraged participants to see what programs their local Legion post is involved with and reach out to them to get involved.

“What would be the best use of our resources and your resources,” she suggested SVA chapter representatives ask Legion personnel. “And then what we find out, is what unites us is service.”

Since American Legion posts have their own initiatives and priorities, Gorbulja-Maldonado encouraged veterans in the audience to find the best fit. “You will find one that works the best for you.”

“At The American Legion, we continue to fight not just for the GI Bill and other educational benefits but for our Four Pillars,” he said. “Imagine that’s a table for everything that we stand for resides. Our Legion table is expanding and changing through our many challenges but our Four Pillars will remain.”

Seavey, an Army combat veteran who served in Afghanistan, relayed his own experience and how The American Legion was a good fit for him after service.

“We may decorate the table or set it differently, but our posts will remain the heart of a vibrant community center, gathering veterans and community members,” he explained. “These are our spaces where we come together, discuss ideas, share stories, shoulder one another’s burdens and rally to a cause greater than our own self-interest. I believe that The American Legion is a natural stepping stone for passionate and motivated SVA chapter members to continue serving their communities. That service can continue. You are not always going to be a student. But you are always going to be a veteran. Stand up there for your fellow veteran. Stand up there besides us.”

• Jared Lyon, the president and CEO of SVA, gave the annual State of the SVA address. He announced that the organization will host a Student Veteran Inclusion and Representation Summit this summer. The summit will “help shift the national conversation from mere tolerance and acknowledgement to a feeling of belonging and investment in America’s underrepresented student veterans,” said Lyon, a member of The American Legion who appeared in Episode 35 of the Tango Alpha Lima podcast. “SVA will convene higher education, nonprofit, corporate, and other partners to ensure Black, Indigenous, and People of Color student veterans reach their potential on campuses, in communities, and in workplaces across the country.”

• Gorbulja-Maldonado also led a discussion aimed at helping student veterans get the most out of their GI Bill, certifications and other education benefits. She encouraged the students to stay away from private loans for as long as possible. “It takes creativity to pay for college when you run out of GI Bill benefits.” Her suggestions included conducting research, taking courses at community colleges that will transfer and searching for scholarships.

• SVA gave the inaugural Senator Bob Dole Continued Service Award to the Global War on Terrorism Memorial Foundation. Michael “Rod” Rodriguez, the group’s president and CEO, accepted the award. “Our foundation is proud to pursue our mission of building a memorial to honor our veterans in close partnership with SVA and many other veteran service organizations,” Rodriguez said. Those VSOs include The American Legion, which supports erecting the memorial on the National Mall via Resolution 16, passed by the National Executive Committee during Springs Meetings in 2017.