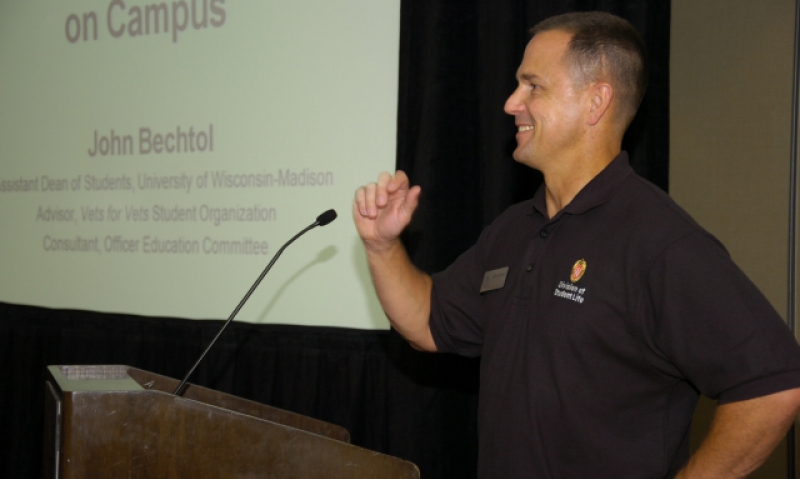 Dr. John Bechtol, Assistant Dean of Students at the University of Wisconsin, is a 21-year Army vet. He's in charge of veteran relations with the school. Photo by Craig Roberts

The passage of time may be just one factor that has transformed the Wisconsin school from a haven for anti-war and anti-military protesters to a comfortable home for veterans enjoying their newly earned Post-9/11 G.I. Bill benefits, said one observer. Derek Blumke, president of the Student Veterans of America (SVA), postulates that shame might also be operative in the academic attitudinal adjustment. "Faculty members (at Madison) were students during the anti-Vietnam War days," he said, "and now they may be feeling guilty about how they and their fellow students treated veterans back then."

Whether Blumke's theory is correct or not, it is conceded that college administrators, staff and faculty members, for the most part, are trying hard help ease the transition from battlefield to campus for military veterans. But, both they and veterans face unique challenges in the assimilation process.

It is Bechtol's job at UW-Madison to help veteran students meet the challenges posed by differing life experiences, age, academic backgrounds, physical and mental wounds, and mindsets. He came to the job in 2008 well qualified for the task. Bechtol is academically adept, with a bachelor's degree from the University of Utah and graduate degrees from Cal Tech and the U.S. Naval War College. He is also a well seasoned military veteran of 21 years as an Army field artillery officer and, in his last assignment before retirement, commander of UW-Madison Army ROTC battalion.

Dean Bechtol acknowledges that military veterans often feel lost and alien in the academic world, at least at first. Recognizing that they are, and may forever be to a certain degree, in a world apart from their peers, he counsels his charges to think that "being a veteran is a benefit, not a hindrance." He encourages faculty to share the same view, emphasizing the positive qualities of leadership, maturity and unique perspective that veterans possess.

Sometimes instilling a positive attitude by and about veterans on campus requires not just intellectual enlightenment, but a change of venue. Bechtol shared an anecdote to illustrate the point. When he was first given the job of staff advisor to the school's veterans organization on campus, Vets for Vets, Bechtol was shocked to learn that its office was in an off-campus building that resembled, in his words, "a crack house." Not only was the vermin- infested place unhealthy physically, he said, it was also emotionally debilitating. The dean prevailed upon the university to move Vets for Vets to the school's Student Activity Center where, he said, "we're now viewed as valued members of the campus community."

Recognition of veterans' value is one of the major themes of the Legion/SVA co-sponsored symposia. As for the Milwaukee event - the second of its type - organizer Bob Madden called it a "great success." Madden, assistant director of the Legion's Economic Division, said he looks forward to a third educational symposium during next spring's Legion Washington Conference.