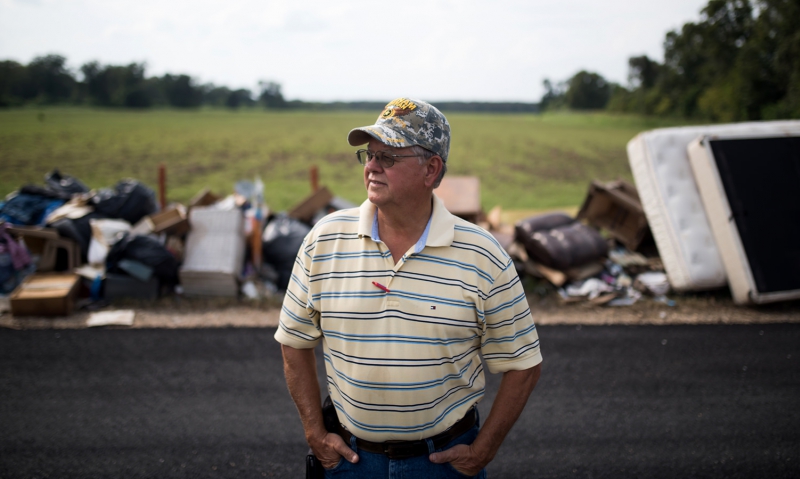 Legionnaire Ray Kacer stands in front of a pile of what was his belongings after his home of 40 years was flooded in Wharton, Texas. September 29, 2017. Photo by Lucas Carter/The American Legion.

Ray Kacer lives a mile from the Colorado River in Wharton, Texas. His home, surrounded by produce fields, had never been flooded in the 40 years he’s lived there with his wife.

Then came Hurricane Harvey and its subsequent flooding.

“The day after the hurricane came through, we went to (Wharton) to see if it had flooded,” Kacer recalled. “At that time it hadn’t yet.”

But the river was quickly swelling. In fact, it was rapidly growing to what would be a 100-year flood. “We survived the hurricane, but we didn’t survive the flood from the Colorado,” he said.

The Kacers also tried to get into the nearby unincorporated town of Glen Flora to check on the river level there but the police had it blocked off.

“I looked down the street and the water was already halfway through town,” Kacer said. “And so it was coming over the backside of our property, of our house, which is really about one mile from Glen Flora and out in the country. There was no warning about this flood coming from the Glen Flora Colorado River banks.”

The Kacers hurriedly packed up a week’s worth of clothes, ushered their two dogs into vehicles and fled their home.

About four days later, they were finally allowed to return to their property. They were greeted with 18 to 24 inches of water in their home, an outbreak of mold, and a yard full of corn stalks and silk that the river had deposited. The current was so strong it ripped the top layer of the road off.

Kacer, a member of American Legion Post 87 in Wharton, knows the recovery will take time. He’s working on fixing his home, one step at a time, and is hopeful of receiving a grant from the Legion’s National Emergency Fund (NEF).

“It’ll help me rebuild,” he said. “We have to do everything — the floors, the walls, furniture, appliances. It takes a lot to rebuild. It takes time. Right now, I’ve got plenty of time.”

The home right now reveals the destructive nature of the floods. The family’s belongings are at the curb, awaiting garbage pickup. The flooring is ripped apart. The interior walls are gone; the framework awaits new drywall and paint.

“It would be nice to be back in by Christmas,” Kacer said. “But the way I subcontract everything and do it on my own, it may take a little longer because a lot of people are doing the same thing. It would be nice to be back in by December but I don’t think I can. I don’t like to rush. Every stage has got to be done right, properly. Because as long as I have a place to stay, in the meantime, I have plenty of patience. I don’t probably have a lot of years, life left, but I’ve got a lot of patience.”

At the curb, Kacer surveys 40 years of cookbooks, memorabilia and other belongings destroyed by the floodwaters. “Memories, you’ll always have memories,” he said. “I will have memories from this storm. What it took and how it can take it – it can take it in just a day or so.”

“I think the military experience helped me to survive and fight, and keep fighting back,” he said. “There are days when I get tired of working. I feel defeated, I just say, ‘Hey, take a day off, get away from it.’ The next day you wake up, and feel better, and say, ‘Let’s hit it again.’ You just get the momentum going again. And you don’t give up. Every time I do something, I clean something or I fix something that means one step forward and I’m completing my goal of getting back into the house. The military teaches that. All the way from boot camp on through four years in the Marine Corps, you deal with life, you deal with life the best way you can. And not by yourself, you don’t have to do it by yourself.”