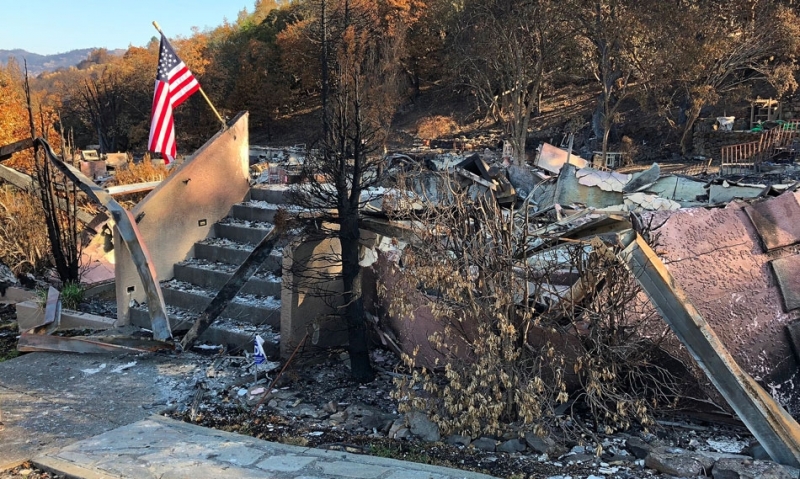 Even after losing their own homes in the Camp Fire that destroyed much of Paradise, Calif., earlier this month, a group of veterans and Sons of The American Legion members are working to provide other veterans left homeless from the fire a glimmer of hope.

“We’re striving to make sure this doesn’t hurt so hard,” said James Holmes, detachment commander of Squadron 259 in Paradise.

The death toll stood at 88 Tuesday night, with another 158 people still missing. The fire burned over 153,000 acres and destroyed nearly 14,000 homes and approximately 4,800 businesses before being contained.

Holmes and his family lost their home in nearby Magalia when the Camp Fire broke out on Nov. 8, barely escaping the inferno. Even so, he’s spent most of the time since helping gather donations and finding shelter for veterans who also lost their homes.

Members of SAL Squadron 259 and Disabled American Veterans Post 106 have formed Butte Vet Help Outpost to collect donations of gift cards, including gas, grocery and retail cards; money; and clothing for those displaced by the fire in Butte County.

Holmes said the gas cards are necessary because “people are living in their car and they’re leaving it running all night” because of the cold. And the gift cards provide some “retail therapy” for the fire victims.

Holmes said the area was already facing a homeless crisis before some 51,000 residents lost their homes to the fire.

District 4 Commander John Leach said a relief fund is being operated through Post 45 in Corning, where he is also the post adjutant.

“What we’re doing is we’re meeting in Oroville with veterans and members of the Legion Family, so we’re able to donate monies to them individually,” Leach said, noting that relief is limited to $300 per person.

Those donations are not part of the National Emergency Fund (NEF) contributions that Legion Family members and posts are entitled to. The National Emergency Fund is available for American Legion and Sons of The American Legion members who have been impacted by the wildfires as well as Legion posts. The NEF provides up to $3,000 for Legion and SAL members with an active membership who have been displaced due to damages to their primary residence, and up to $10,000 for posts that have been damaged by a natural disaster and whose programs and activities within the community are impacted. To apply for an NEF grant, please visit www.legion.org/emergency.

Leach said the non-NEF relief efforts have raised a little over $26,000 to help those veterans impacted by the Camp Fire. And those who are eligible are being encouraged to apply for NEF relief.