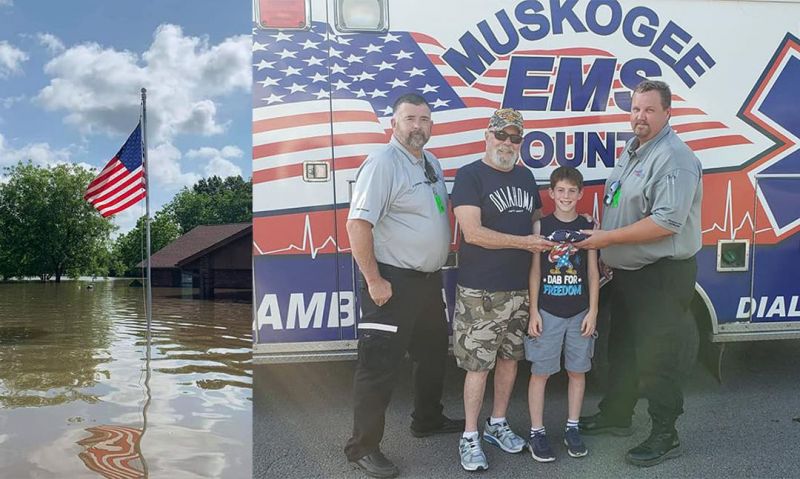 Vietnam veteran Jack Lloyd was on his first vacation in nearly two decades when a he received a call from his children about trouble at home.

Record-setting flooding in Fort Gibson, Okla., had pushed dams and levees to the limits and the Arkansas River crested at over 46 feet, more than 20 feet above flood stage. Lloyd’s house was engulfed in approximately 10 feet of water and a picture of his neighborhood was going viral.

“I saw a picture of my house three-quarters full but with my flag still flying above it,” said Lloyd, a member of Frank Gladd American Legion Post 20. “I said, that no matter what happens in Oklahoma, Old Glory still flies.”

In the midst of a disaster, a rescue crew was in the right place at the right time.

“The flag was just about to go underwater when a group of medics in a rescue boat taking people out of the neighborhood saw the flag and went over and took it down just before it touched the water. It was the most awesome thing I had ever heard of. They folded it up and two days later they presented it to me at the American Legion post. It felt good to get it back,” Lloyd said.

Jerry Cooper, a fellow member of Frank Gladd Post 20, was one of the Muskogee County Emergency Medical Services members who took action.

“My partner Thomas Bebee and I were on a welfare check in an airboat when we saw the flag on the pole and with water still rising we knew we needed to save the flag,” Cooper said. “We wanted to save the flag because what it represents and all the sacrifices it stands for. Being a veteran myself, this was important to me.”

Lloyd, who served as a 12th Special Forces Group captain, has flown the flag at his house for over 20 years and said he comes from a patriotic family. “That flag is the symbol of America. It means everything in the world to me. It represents the United States, the Constitution and our way of life. I fly it morning, noon and night.”

For two weeks, however, his flagpole was empty. When water receded and his community started the long recovery process, a group of fellow Legionnaires wanted to ensure that his flagpole was no longer bare.

Led by post commander Tim Smith, a group of Legionnaires from Post 20 visited his home, fixed his flag pole and helped hoist a new flag, which was given dedicated on behalf of the members of Post 20 by vice commander Jim Quinn.

Symbolic of the start of the recovery process and an attempt to return to normalcy, Lloyd became emotional seeing the flag once again in its rightful spot. “It warms my heart,” he said. “This shows the camaraderie we have at The American Legion. Old Glory flies again.”

As for his previous flag, which will always hold a special place in his heart, Lloyd said, “That flag is going to be retired and put it in a triangular box and after my house is rebuilt I am going to hang that box in my house with a plaque on it that says, ‘This is the flag that flew during the flood of 2019.’”

He said to those considering a donation, “Someday you might need help too. It might not be today or tomorrow, but someday it might be you," Lloyd said. "Right now, this community needs your help.”

To donate to the National Emergency Fund, click here.