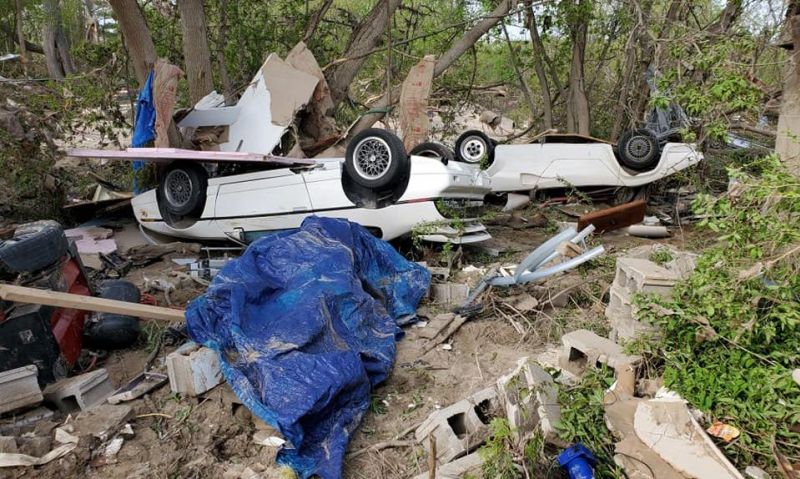 Just days after dam failures flooded parts of north-central Michigan, American Legion members in the affected area were mobilizing to help their communities.

“We’re pretty much packed to the rafters” with donations of cleaning supplies, personal hygiene products, and more, said Mark Authier, commander of Post 443 in Sanford, Mich.

Post 443 sits far enough east that the building wasn’t impacted by the millions of gallons of water that emptied out of Wixom Lake when the Edenville Dam ruptured after days of heavy rain. But the flooding forced thousands from their homes, and the cleanup has begun.

“People are mostly involved in getting their homes and businesses just cleaned up,” Authier said. “There was a big effort over the weekend and (on) Memorial Day where people were just coming in and out of town in dump trucks, filling them and taking them to the area landfill. What they’re concentrating on right now is cleanup.”

Despite the post being closed since March 16 due to Gov. Gretchen Whitmer’s stay-at-home order, Post 443 quickly became a distribution center for supplies to the community.

Authier said donations had been so generous, the post had to ask donors to stop bringing clothing — “People don’t have any place to put it,” he said — but donations of other necessities were still coming in.

The community’s generosity was also evident in the reaction to a GoFundMe page set up to help fund the rebuilding of the Sanford Flag Memorial. Post 443’s Legion Riders chapter helped raised funds with the Ryan Burgess Memorial Foundation to build the monument, which was dedicated in 2018. Marine Lance Cpl. Ryan Burgess was killed by an IED in Iraq in 2006.

“One flagpole out of the seven was bent down into the ground,” Authier said. “We rescued the American flag and the POW flag; both were tattered. Everything else washed downstream. We rescued the combat cross and some of the brickwork, which we’re storing at the post until we can rebuild.”

As of Tuesday afternoon, the GoFundMe campaign had raised over $33,000 toward rebuilding the monument.

“We’re a small town, but this community has really pulled together to try to clean up and get ready to move on to the next phase, which we hope will be a new and better, stronger Sanford,” Authier said.

The National Emergency Fund is available for American Legion and Sons of The American Legion members, as well as Legion posts, who have been impacted by natural disasters like the flooding in Michigan. The NEF provides up to $3,000 for Legion and SAL members with an active membership who have been displaced due to damages to their primary residence, and up to $10,000 for posts that have been damaged by a natural disaster and whose programs and activities within the community are impacted. To apply for an NEF grant, please visit www.legion.org/emergency.