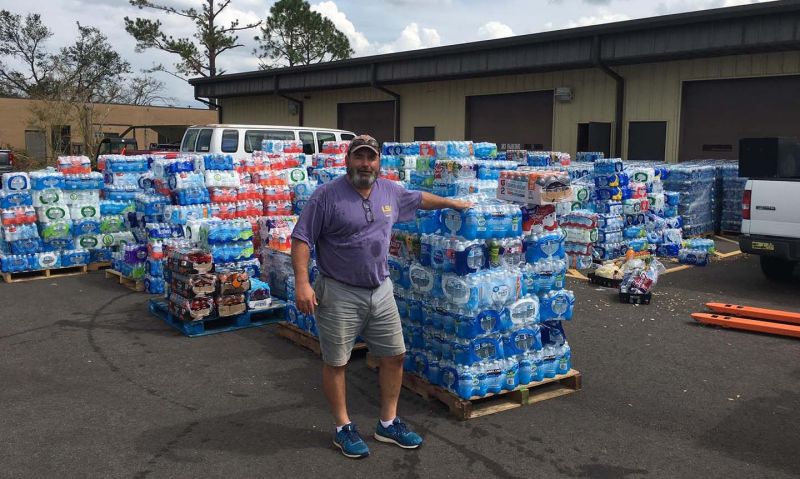 A few days after Lake Charles, La., became one of the hardest hit communities from Hurricane Laura, a category 4 storm that created 150 mile per hour winds, Christopher Perry knew he had to do something to help. After all, he’s originally from that area where family and friends still reside.

He decided to collect needed supplies and monetary donations. But he knew there “was no way I could do this by myself,” he said. “As luck and God would have it, I was in the right place at the right time.”

A member of Clayton E. Moneymaker American Legion Post 237 in Huntsville, Perry was eating lunch there when he asked the bar manager Channa O’Keefe if the post would serve as a donation drop-off. “She said the post would love to," he said. "And that’s how we got started.

“I feel proud that The American Legion from Huntsville is providing an avenue to help.”

Perry began collecting donations Sept. 1. And on Sept. 6, he loaded up his truck and trailer for the first delivery to McNeese State University in Lake Charles, Perry’s alma mater that is serving as a search-and-rescue location.

“I’m doing this because people need help,” Perry said. “I know what they’re going through. I know what the environment is down there. It’s hot, it’s sweaty, there’s mosquitoes, there’s fire ants. Not only do they have to fight not having everyday amenities, but the elements come back to fight you. You have no air conditioning, and it’s 98 degrees with 80 percent humidity, and you’re running on generators 24/7 for two weeks now, that takes a toll. The only thing you’re worried about is staying alive and trying to provide the basic necessities for your family.”

“The devastation is unbelievable … I can’t describe it,” Perry said. “There’s not a house or building that’s not damaged. There’s water, the residents are eating MREs (meals ready-to-eat). I checked on friends and some faired OK, some totally lost their house.”

Perry is continuing to collect needed donations with Post 237 serving as the drop-off.

“I’m so grateful for The American Legion’s support and assistance," he said. "I just load up the supplies and haul them out.”

The NEF provides up to $3,000 for American Legion and Sons members with an active membership who have been displaced due to damages to their primary residence, and up to $10,000 for posts that have been damaged by a natural disaster and whose programs and activities within the community are impacted.

Apply for an NEF grant

Donations are also accepted to fund the NEF. One hundred percent of donations to the NEF directly help veterans and their families recover from natural disasters. Donate to NEF.

American Legion posts that are helping their communities affected by these or other natural disasters are encouraged to share their stories on www.legiontown.org.