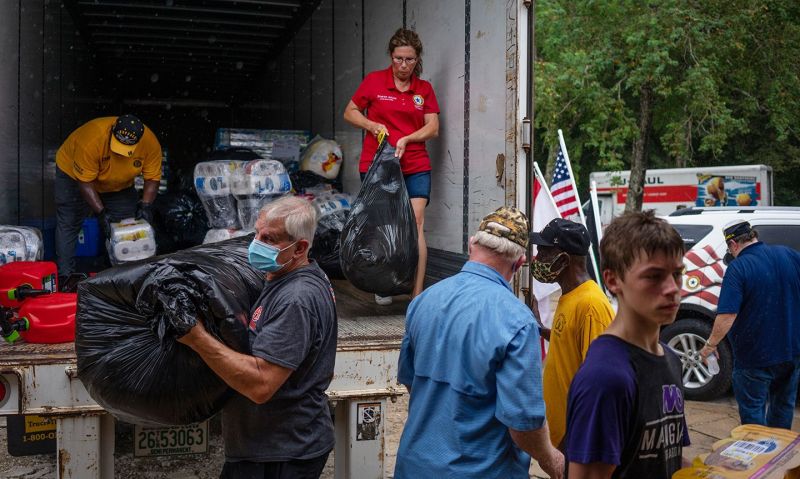 Donations are unloaded at Magnolia Care Center Veterans Home in Baton Rouge, La., after members of The American Legion at posts across Alabama arrived with goods for those impacted by Hurricane Laura on September 12, 2020. Photo by Kathleen Flynn

The 2020 Atlantic hurricane season has been the second-most active on record, with 25 named storms already and the season not officially over until Nov. 30.

A record 10 of those named storms have made landfall in the contiguous United States — most recently Hurricane Delta, which made landfall near Creole, La., on Oct. 9. Delta was the fourth hurricane to strike Louisiana this year, tying a record.

Through Oct. 8, the NEF has approved 65 grants totaling $114,848 this year. The grants have helped those recovering from hurricanes in Texas and Louisiana; the Jan. 7 earthquake in Puerto Rico; flood victims in North Carolina, Missouri, Mississippi, Michigan and Illinois; and those impacted by tornadoes in Mississippi and Tennessee.

The NEF provides up to $3,000 for American Legion and SAL members with an active membership who have been displaced due to damages to their primary residence, and up to $10,000 for posts that have been damaged by a natural disaster and whose programs and activities within the community are impacted. To apply for an NEF grant, please visit www.legion.org/emergency.

An audio PowerPoint created by National Headquarters shares what the NEF is, what it does and does not cover, the correct way to fill out an application, and eligibility. Access the "National Emergency Fund Grant Application Procedures" PowerPoint here.