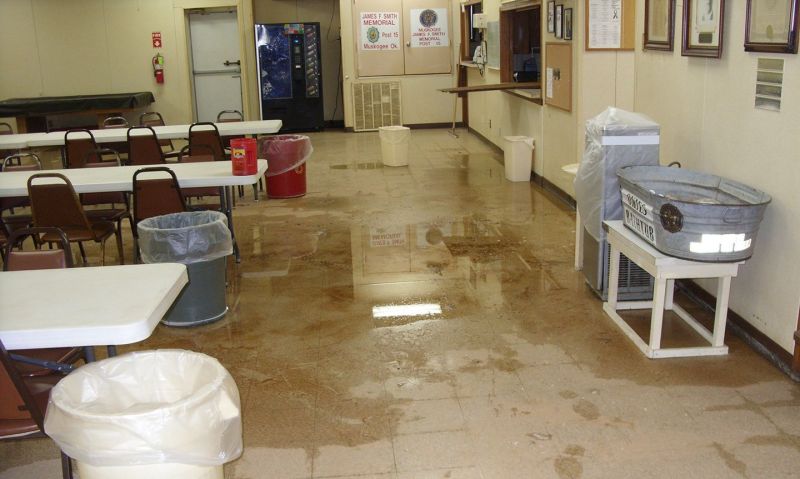 Damage to American Legion Post 15 in Muskogee, Okla., after pipes in the ceiling froze and burst. Photo by Raul Rizo.

Unofficially known as Uri, the major winter storm that struck much of the U.S. and parts of Canada and Mexico in mid-February impacted millions — and in many cases, continues to do so.

Hundreds of homes and buildings have been damaged in parts of Texas, Oklahoma, and Louisiana as pipes froze and then burst, unaccustomed to such cold conditions. Among those damaged: the headquarters of the American Legion Department of Texas, which was forced to close Feb. 18 due to a broken pipe.

“Clean-up and repair has been slow due to the high demand right now across the entire state,” West said.

Heavy snow and freezing temperatures also led to emergency conditions in Oklahoma. Among those dealing with the aftermath was American Legion Post 15 in Muskogee, where pipes froze and broke in the ceiling of the building.

“Water flooded the entire building except for the Auxiliary area,” an add-on which was built at a higher elevation, Rizo said. The water destroyed ceiling tiles, insulation, carpeting, floor tiles, and interior walls.

“Throughout the initial clean-up of the building, approximately 25 post members and Muskogee area members pitched in to help,” including Legionnaires, Auxiliary, Sons of The American Legion and Legion Riders members, Rizo said.

Rizo said the clean-up of the post may be completed soon, but the restoration process could take 3-6 months.

“It is much too early to completely determine how extensive the building structure was damaged and too early for an approximate cost damage assessment,” Rizo said.

In McDonough, Ga., Willie B. Hatcher Post 516 partnered with the Henry County Police Department to collect bottled water from the community to send to Texas.

“Our first initiative was to do one trailer load, but the outpouring of support of the citizens, we had to bring in a second truck,” said Post 516 Commander Alton Head.

The two truckloads of water left McDonough Wednesday afternoon for the 16-hour drive.

The NEF provides up to $3,000 for Legion and SAL members with an active membership who have been displaced due to damages to their primary residence, and up to $10,000 for posts that have been damaged by a natural disaster and whose programs and activities within the community are impacted. To apply for an NEF grant, please visit www.legion.org/emergency. Complete application requirements are available at www.legion.org/emergency/apply.