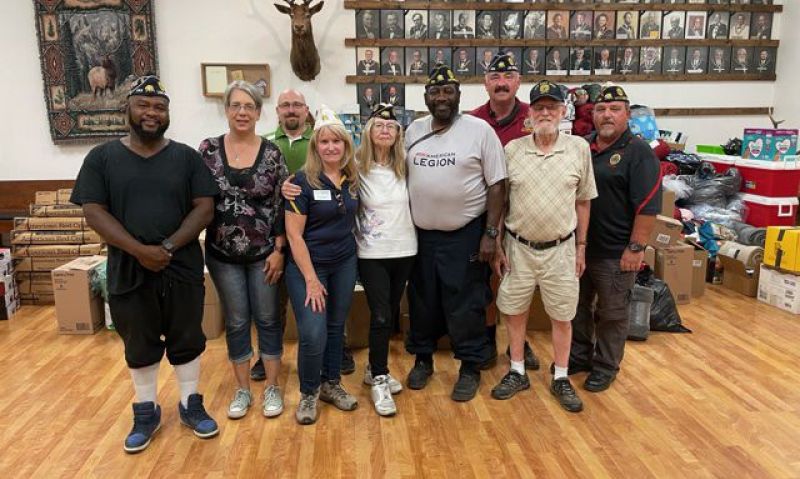 Drought conditions in the western U.S. have spurred hundreds of wildfires, displacing thousands and destroying homes and businesses across several states.

The largest of the wildfires, the Dixie Fire in California, has burned over 620,000 acres and destroyed over 1,200 buildings, including some 650 homes. That disaster and other fires across the state have prompted relief efforts from the American Legion Department of California.

“Like any disaster, things are rapidly changing on the ground here,” Department Commander Autrey James wrote in an email Tuesday. “We had planned to send a truck and SUV with supplies to Susanville in Lassen County on Wednesday. As we were leaving Quincy in Plumas County, we began to get alerts that they were closing the roads around Susanville and beginning to evacuate people from that city to Plumas County.

“For now, we have had to delay additional deliveries because we don’t want to be in the way. Once things stabilize a little, we will get the truck moving to where the evacuees are; hopefully that will happen later this week.”

James put out a call for action last week to help survivors of the Dixie Fire. On Facebook, James posted: “We assigned coordinators in three parts of the state. Wil Williams and John Aldridge in the North, JD Bennett in the Central Valley, and Jere Romano in the south. Together we collected donations from Posts from as far north as Gasquet and as far south as San Diego. Post from every area of our state participated. Monday was the first major delivery day, Andre Andrews, J.L. Romano, James JD Bennett, Barbara Lombrano and myself delivered two 10’ U-haul trucks, a full size pick truck and an SUV filled with donated goods and gift cards to Quincy CA.”

“In addition, some people have sent checks to the Department of California for the Dixie Fire relief from as far away as Massachusetts,” James wrote. Those checks are being used to buy gift cards so those out of work can buy food, gas, and other needed items. The gift cards are also helpful to those staying in hotels, James added, noting that they have given out close to $5,000 in gift cards alone to the community of Quincy.

James also shared an email from Plumas County Veteran Service Officer Bill Cook, who wrote: “On behalf of this office and on behalf of Plumas County veterans I offer my thanks and appreciation for you and your delivery crew and the CA American Legion and all the various Legion Posts that made Dixie Fire victim contributions. Putting together such an effort in such a short time is a testament to your office’s organization, your leadership, and the generosity of your State and local membership. Please, on our behalf, if you have the opportunity thank the people in your organization for their effort and generosity. Traffic, long distances, road construction, smoke and 100 degree heat didn’t stop or slow you or your crew down to deliver and unload two U Haul trucks, a pickup, and an SUV. Memorable.”