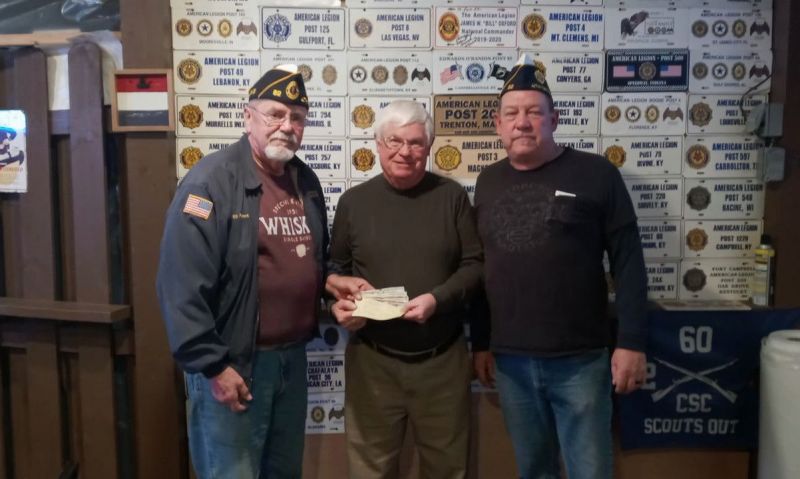 In the aftermath of last weekend’s deadly tornado outbreak that destroyed the town of Mayfield, Ky., including American Legion Post 26, Legion Family across the country are collecting donations to help.

They’re also helping closer by. Post 82 in Campbellsville, Ky., donated $1,250 to the Department of Kentucky’s relief fund aimed at helping those impacted by the tornado. Department Adjutant Pat Keefe said donations are being collected from anyone who wishes to provide assistance. Checks can be sent to the Kentucky American Legion Tornado Relief Fund, P.O. Box 2123, Louisville, KY 40201, and donors can indicate on the memo line the specific community they want their donation to be directed to.

The tornado stayed on the ground for at least 128 miles, while other tornadoes touched down in Illinois, Arkansas, Missouri and Tennessee. The storms killed an estimated 74 people in Kentucky; six in Illinois, including two veterans who died in the collapse of an Amazon warehouse; four in Tennessee; two in Arkansas; and two in Missouri.

Here are some of the Legion Family’s relief efforts across the country:

·       In Winston County, Whitehead Post 33 is helping collect donations of relief items including tarps, pre-mixed chainsaw fuel, diapers, canned foods, personal hygiene products, pet food, sleeping bags, towels, washcloths, can openers, batteries, flashlights and more. A 35-foot box trailer containing the donations is scheduled to leave Haleyville, Ala., on Dec. 19 for Mayfield. Donations can be made at the trailer at Haleyville City Hall, 911 21st St., from 7 a.m. to 5 p.m.

Trinque also told WJAR that they plan to take an American flag to replace one that Mayfield Mayor Kathy Stewart O’Nan was shown pulling from the rubble.

“And we’re taking a Rhode Island state flag and everyone who donates were encouraging them to sign the state flag and then we’re going to present it when we get there,” Trinque told the TV station.

Department of Texas Commander Bret Watson reached out via Facebook to encourage Legion Family in his state to donate supplies.

“They are needing water, food, coats, clothes, personal hygiene products and toys, Christmas items. They have lost everything they had,” Watson wrote.

“The American Legion Department of Texas will be hauling all items to Kentucky next week. Let’s help those in need at this time,” he added.

If your post or department is collecting donations for tornado relief, please let us know so we can share the Legion Family's charitable efforts. Email wproffet@legion.org or hhoward@legion.org with details.

The American Legion Temporary Financial Assistance (TFA)  helps families in need meet the cost of shelter, food, utilities, clothing, and health expenses. For example, during a natural disaster where a family has lost a home or it's been severely damaged, TFA can help cover the cost of temporary housing.

TFA grants are available to minor children of active-duty servicemembers or American Legion members. No child can be considered eligible until a complete investigation is conducted at the post or department level, a legitimate family need is determined, and all other available assistance resources have been utilized or exhausted.

For TFA information on eligibility requirements and how to apply, visit legion.org/financialassistance.

TFA grants are made possible through The American Legion Veterans and Children Foundation. Donate here.

Operation Comfort Warrior is a program dedicated to meeting the needs of wounded, injured or ill veterans. OCW grants often purchase items that are not normally covered by the government.

To apply for a grant, email ocw@legion.org

To make a donation, visit here.