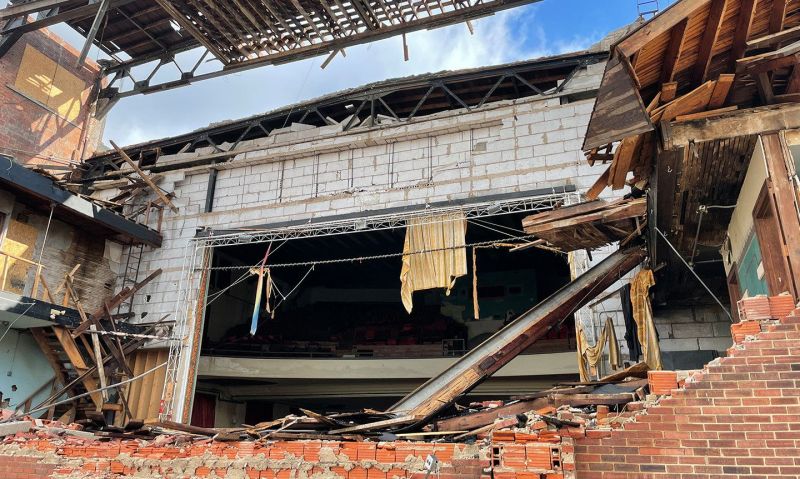 American Legion Post 26 in Mayfield, Ky., stood in the direct path of the massive tornado that unleashed the most severe devastation during the record-setting storms Dec. 10-11.

The downtown Mayfield building dates back to 1923, the same year Post 26 received its charter and moved in. The historic building housed a movie theater with hundreds of seats, where patrons could sit in the main section or in the balcony rising above. At the front, was a pit for musicians to perform during the Friday and Saturday night dances.

“The acoustics in there were unbelievable,” Post 26 Commander Wendell Gugu said. “I’ve seen pictures of what it looked like in its heyday of the 50s and 60s. It was immaculate.”

Now the theater is heavily damaged, beyond repair, as is the rest of the post building. Instead of a theater screen, the empty seats face the outside world where a massive pile of bricks, beams and other remnants serve as the landscape. The post’s windows are shattered. Debris is scattered throughout the building. Puddles of rainwater inundate the second floor.

“A building is a building,” he said. “The home is the family you have in it. The chairs, the tables, all that stuff can be replaced. But this kind of stuff (the original charter) can’t be replaced.”

Returning to the post home earlier this week, Gugu was surprised to see that someone had hung a new American flag at the back of the building. Amid the town’s rubble, there were other signs of patriotism as flags flew over the crushed buildings.

“It’s overwhelming,” he said. “With the age and the way this structure is built, I don’t see a way to rebuild or reboot it. We’ve had people and financial losses, but it definitely could have been a lot worse. I’m glad we didn’t have any more than we did.”

(The American Legion’s National Emergency Fund (NEF) assists members and posts affected by natural disasters with immediate financial grants. To learn more about NEF, how to apply or make a donation, visit www.legion.org/NEF.)

Gugu estimates that the tornado cut a swath at least a mile long through town.

According to radar, the tornado lifted debris up to 30,000 feet — generally where many jets fly. Most of the structures in Mayfield were heavily damaged or destroyed, including the police and fire stations, city hall and businesses. The Graves County Courthouse suffered significant roof damage, had its clock tower torn off and had some of its exterior upper-floor walls knocked down.

“The support has been great,” Gugu said, taking a brief break from his nonstop work in the recovery and relief effort. “The Legion posts in this state have been taking care of anybody in need.”

Back in the day, the Legion post oversaw the theater, which was open to the public. Gugu recalls his grandfather, who was not a veteran, talking about the first time he saw a movie was at the post theater.

“I’ve already had quite a few good memories here,” he recalled. “A lot of good friends. The biggest thing is the members who have told me about their stories of what they did here.”

Decades ago, the downstairs was used for bowling leagues, one for men and another for women. World War II veteran Macon Werk, a former member, met his wife, Peggy, at the post. They were married for about 75 years until he passed away in the spring. “The post has been a mainstay in the community for years and years, especially with the building we had here.”

The post was not just a venue for entertainment. Its community outreach includes placing 3,000 flags on veterans graves in local cemeteries. Members also work with other nonprofits in the area such as a local nonprofit for abused kids. “If someone is in need here in the town, we make sure that we try to assist.”

The tornado ripped away bricks and drywall from the building, but could not shred Post 26’s commitment to its community. Gugu, a 53-year-old Air Force veteran who served during Operation Desert Storm, will see to that.

“I do not think that this building will be recovered,” he said. “I’d rather see us have a building that we can use and do more community service out of and give back to the community. The post is going to continue, at least as long as I am commander.”

Post 26 continues its community leadership in a time of crisis. It’s managing one of several distribution sites in Mayfield.

Gugu’s employer, a Ford dealership, has allowed him to use space in its facility as a makeshift warehouse. In just the first week, aid has arrived from at least 25 states, including Washington, Alaska, Delaware and Florida, overwhelming the space usually reserved for dozens of vehicles.

Cases of water bottles, bags of clothing, food for people and pets, tools, cleaning supplies, blankets, hygiene products and more are sorted, organized and transported to those in need.

As he unloaded a trailer, Gugu paused, “We’ve had everything come in here, and we’ve been separating and dispersing it across town for the community leaders, especially those in low-income areas. It’s been overwhelming.”

Tracy Gugu, Wendell’s wife, says the post’s Facebook page has been filled with questions about how to help. Right now the immediate needs like water, food and clothing have been handled. Still, Mayfield’s recovery will extend for months.

“Right now, we need more supplies and getting people back in their homes,” said Tracy, adding the priorities are rolls of plastic, plywood boards, Duct tape, nails, tarps. “We’ve been very blessed.”

She is among the volunteers assisting at the recovery site where her husband has stationed himself for 10-plus hours daily since the tornado.

“It was devastating,” said Tracy, a retired police officer. “Before you couldn’t see across town because of all the buildings. Now you can see all the way to the main square. We stood there with tears in our eyes, asking, ‘How are these people going to rebuild?’ That was a moment of despair. With all the Legions coming together, all the communities coming together, and they are helping these people. Hope has replaced the despair we saw.”

A week after the disaster unfolded, relief showed up from American Legion Post 491 in McHenry County, Ill., 70 miles west of Chicago.

Geoff Lee, a post-9/11 Army veteran, drove an 18-foot trailer loaded with relief supplies 950 miles roundtrip from their post near the Illinois-Wisconsin border to Mayfield.

“We wanted to help brothers and sisters in need, and Americans in general,” said Lee, who presented the checks and other items. “If someone says they need help, we are ready to answer the call. That is what The American Legion is all about — veterans, families and communities.”

The delivery included clothes, water, tools and 1,000 handmade fleece blankets. The Sons of The American Legion squadron sent along several boxes of American Legion shirts, socks and other clothes for Post 26 to distribute to those in need. “I’ve got Legion members who could use this right now. This is amazing,” Gugu said. “It is really meaningful.”

For Lee, it’s just a matter of giving back.

“I know that I have received aid before when I needed it,” he said. “Sometimes it’s hard for us to admit we need help, and I get that. Being in that situation before, now it’s nice to know it’s my turn to help and give back to people in the U.S. It feels great. It’s amazing.”

Vanessa Miller, a member of the Auxiliary unit, explained that a Facebook post helped generate the donations from their community. Legion Family members took turns outside the post with collection containers.

“Our community got together to make the fleece blankets,” she said. “A lady showed up at the post with all of them and knew that we were headed down here. They were made mostly for the kiddos, like a security blanket. We didn’t even have to ask. People just gave. Our community has always rallied together for whatever we needed. We’re all Americans, we all support each other.”

Communities from across the United States continue to provide the much-needed relief supplies for whoever has the greatest need. On the local level, Gugu gives comfort to his neighbors.

He learned that the daughter of one of his former post members lost her home and essentially all its contents. Her late dad’s shadow box was destroyed but the flag presented at his funeral survived. “They entrusted me with the flag,” Gugu said. “We replaced the box and got it to them. Doing something small like that doesn’t sound like much to us. But to her, it was everything.”

That’s the kind of spirit that still shines in Mayfield, even in one of its darkest moments. The town, and the post itself, have seen a decline in population over the years. Gugu is determined to not only keep the post open, but improve it.