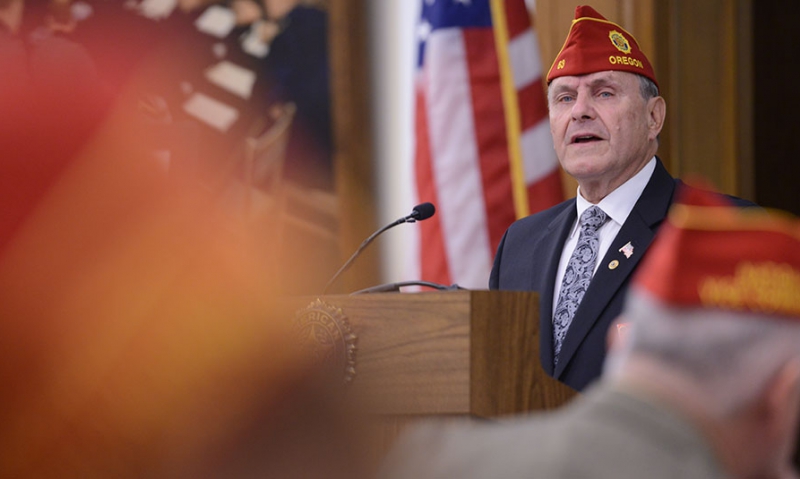 While remembering the loss of American Legion Past National Commander H.F. “Sparky” Gierke earlier this year, National Commander Charles E. Schmidt reflected on the organization’s membership standings during Gierke's office term in 1989 compared to now – a decrease of one million members has occurred over 27 years.

“We must turn membership around,” said Schmidt to National Executive Committee (NEC) members on Wednesday during Fall Meetings in Indianapolis. When he examined the organization’s period of highest membership growth to its decline over the years, he pointed out the difference is that “World War I veterans had a mission to make sure that no veteran was left behind; that no veteran lacked the medical care that he or she needed. They didn’t care about the cost of membership; all they cared about was the price that was paid to be eligible for membership.”

To encourage membership growth – part of the Legion’s five-year strategic plan – Schmidt reiterated his membership incentives. They include a commander’s “Carry the Legacy Forward” pin to any Legion member who obtains three new members for 2017; an honor ribbon for any Legion family that achieves 100 percent membership by May 30; and a monetary award for the department with the largest percentage increase of new members from Jan. 1 to May 31.

“We cannot experience a culture of growth if we do not convince our existing members that renewal in our organization is in their own personal interest, as well as the interest of their fellow veterans and community members,” Schmidt said. “We are missing a sincere urgency to carry the legacy forward; we need Legionnaires in order to keep that legacy alive. And it’s a great legacy that The American Legion has built.”

Schmidt reminded the NEC that while membership incentives are a few of the perks to recruiting, it’s not always about earning rewards. “It’s about making sure that every veteran has a place where he or she can go to find the people who understand what their experience has meant,” he said. “It’s ensuring that we have enough resources to provide for every veteran, spouse and child so they can all enjoy the American dream that they themselves helped pay for.”

Out of the 55 American Legion departments, 51 exceeded the 55 percent membership target date on Oct. 12. One of the many ways posts and districts are helping to improve membership numbers is through revitalization efforts. In 2015, more than 2,300 Legion posts were either chartered or revitalized; that number is expected to increase by the end of 2016. And the retention rate of DMS members who transfer to a post during a revitalization effort is 72 percent.

Between now and the end of December, 21 district revitalizations are scheduled.

“The revitalization program does more than just transfer members – it also gets new members signed up as well as provides great membership training,” said Kenneth Orrock, Membership & Post Activities Committee chairman, during his report to the NEC.

The National Veterans Affairs & Rehabilitation Commission announced during its report to the NEC that 10 System Worth Saving (SWS) visits are scheduled between now and the end of 2017. A few of the site visits include VA medical centers in New Hampshire, Alaska, California, Phoenix, Iowa, Michigan, Wisconsin and Montana. The medical centers chosen for the visits were based on challenges with access, wait times, high rates of suicide and other concerning factors. A town hall meeting will be held before each SWS visit to allow local veterans and their family members to voice their concerns for the health care they receive.

The meeting concluded with a $24,904 Operation Comfort Warriors donation from the Department of Indiana.