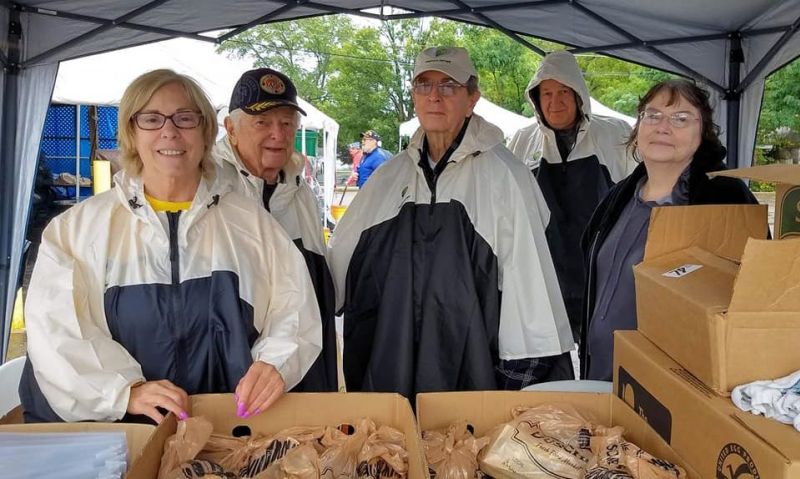 And then she saw those efforts and coverage of them dwindle. But at Post 346 in Farmington, Mich., they have not. In three months the post’s American Legion Family has helped distribute hundreds of boxes of non-perishable food, first during a June effort and then on Sept. 25. Teaming up with other organizations, the post has been able to help ease food insecurity not only for veterans, military personnel and their families, but to members of the community in general.

“At first, there was a spike in visibility because of COVID but after a few months that visibility went down,” Davis said. “We recognize that there is community need – veterans and community need – and so that’s why we partnered with these two groups.”

In June, Post 346 teamed with the Oakland County Veterans’ Services, the Oakland Community Health Network, CaptionCall.com, and the Department of Veterans Affairs to distribute pre-packaged boxes of nonperishable food provided by Lighthouse of Oakland County.

During the September distribution, Post 346 received 500 boxes of food from Gleaners Community Food Bank. The post’s Legion Family itself distributed around 150 of those boxes to veterans, active-duty military, National Guardsmen and reservists. Davis worked with Gleaners to get 250 of the boxes delivered to CARES in Farmington Hills, which provides food, clothing, job education and training to individuals and families facing financial insecurity or family instability.

And Post 346 provided the remaining boxes to Heartfelt Harvest, an organization that distributes food to local food pantries. Heartfelt volunteers also got a list from Post 346 of people who had signed up to receive a food box but didn’t make it to the post and has reached out to those individuals to provide them with the food.

“We’re hitting everybody, between the partnership with CARES and Heartfelt Harvest. It was just fantastic,” Davis said. “Plus, Heartfelt Harvest brought us items (to distribute) that cannot be purchased on food stamps, like cleaning products and also some hygiene products. It was absolutely wonderful, a wonderful community event.

“The first (food drive), that’s what got (the post) started on this, and now we’re collaborating, and it’s wonderful.”