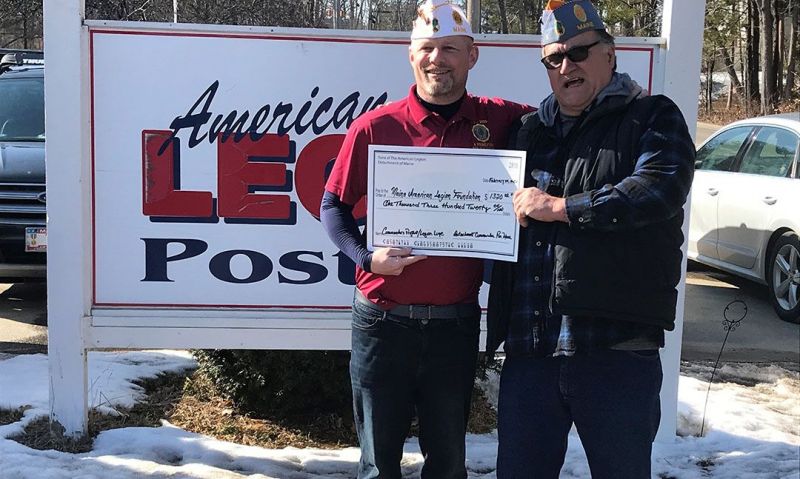 Temperatures that dipped below zero didn’t temper the enthusiasm for an inaugural fundraiser Feb. 15 in the American Legion Department of Maine. Around 60 Maine American Legion Family members braved the weather to take part in the first Legion Luge at the Camden Snow Bowl.

The Legion Family members from all over the state competed for the best times on toboggan chutes, breaking up into teams of up to four riders, as well as a “Sweetheart” competition for two-person teams.

The venue, which the previous week had hosted the 2020 U.S. National Toboggan Championship, was an ideal backdrop for what the event’s creators – Legion Family members Ron and Debra Ann Marr – intend to become an annual fundraiser.

Teams had three chances to go down the chute in order to get their best time; many of the teams wore costumes. The night before the event, Winslow-Holbrook-MerrittPost 1 in Rockland hosted a dinner for the participants.

Debra Ann, Ron’s wife and the 2015-2016 American Legion Auxiliary department president, said the Camden Snow Bowl already has been booked for 2021 to host the event again. “We’re hoping for twice the participation,” said Debra Ann, noting that Ron plans to invite Legion Family members from other nearby states to take part in the Legion Luge next year.

Using a non-traditional way to raise funds is a way “to encourage some of the younger people to come and have fun,” Debra Ann said. “If you can encourage the younger crowd they’re going to stay. That’s our future.”

The event served as a fundraiser for the American Legion Department of Maine Foundation, which was created to provide resources to the department’s programs and services that will enhance the lives of veterans, their families, children and communities in Maine. Raising money for the fund is Department of Maine American Legion Commander Matthew Jabaut’s project for his year, and the Marrs were able to present him with a check for nearly $1,600 a week later.

“It was a blast,” Ron said. “If you can put something like this together, now it’s a family affair.”