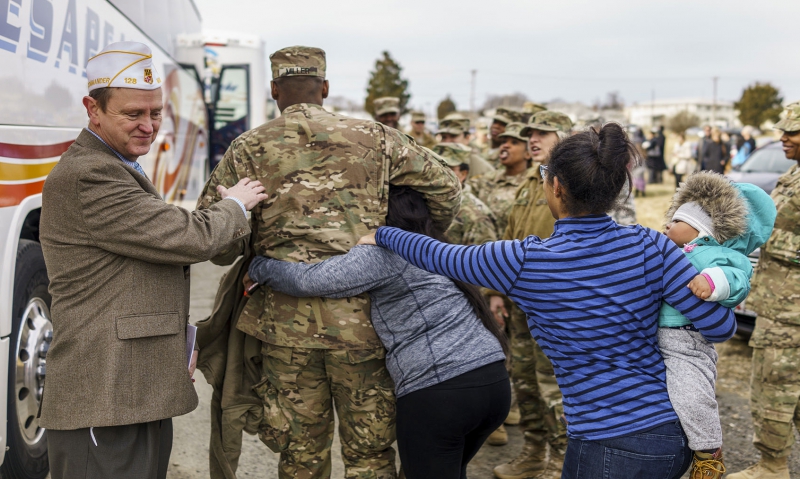 Nearly 200 Maryland Army National Guard members tearfully said goodbye to their loved ones last Sunday as they prepare for a nine-month deployment to the Middle East. And standing side-by-side with them were American Legion Family members who came to show their support and provide reassurance that The American Legion will meet the needs of their families during their deployment and upon their return home.

“One of our primary focuses is to stand behind and support veterans. One way to support our troops is to show them that we are here for their families,” said Carolynn Baker, past commander for the Department of Maryland and a member of Post 39 in Bel Air. “Our attendance at the deployment ceremony was to let (the troops and their families) know that The American Legion is here and if there are any problems while they are away, we are here to help.”

Men and women of the 29th Combat Aviation Brigade proudly stood under the American flag for their deployment ceremony, which was held at the U.S. Army Aberdeen Proving Grounds in Edgewood. The ceremony brought back memories for retired Army officer and Legionnaire David Heredia, and it reminded him why it was important for The American Legion family to be there.

“By me being there with my wife (Debra) and my fellow Legionnaires, I felt that it allowed me to let them know that ‘Hey, we’ve been there, we know what you’re going through, and we’re here for you and your family,’” said Heredia, a Legion Rider and member of Post 128 in Aberdeen. “We let them know that The American Legion is here to support not only them but their families.”

For many of the soldiers and their families, it’s their second deployment with the 29th Combat Aviation Brigade since 2012, then under the command of Col. Dave Carey, a member of Post 39.

“We leaned on the Legion on our past deployment for the departing and returning ceremony. The Legion being there this time, they really stepped up and said, ‘We are behind you all the way and if your family has problems while you’re gone here’s how to reach us,’” Carey said. “It’s amazing to me that the folks that went with me, a lot of them are still in the unit and going again. It’s amazing that there are still those soldiers out there, especially in the National Guard, who are willing to go back three, four, five times because their unit needs them; it’s a second family.”

But for other soldiers of the unit, it’s their first deployment and not only are families being left behind, but civilian jobs as well. That’s why the Legion’s presence at the deployment ceremony was a reminder to all that “The American Legion as a whole will be there for their families through our Family Support Network,” said David Johnson, a Department of Maryland second vice commander. “The American Legion wants to help the ones deploying stay focused on their mission and stay safe.”

Baker, Heredia and Johnson provided their contact information to families, the commanding general and unit commander, and support services onsite. “I told them that ‘we will get your APO’s, we will contact you, and we will let you know we’re still here,’” Johnson said. And Post 17 members reminded the families that they are located right next door to the base.

About 18 Guardsmen from the unit came to Post 17 two weeks ago for a social gathering, and while a few were already members of the post, 11 signed up. Post 17 Commander Edward McCann and his wife Mary, who is the post adjutant, fed the soldiers and said they enjoy having the young men and women come to the post.

“It’s all about the Legion’s Family Support Network,” Mary said. “We try to make sure the families, while their soldier is deployed, have a place they can come to.”

“The post is here for their families and to show support to the troops,” Edward said.

As last hugs and goodbyes were given from spouses and children before the soldiers boarded buses to depart for their mission, it was an emotional moment to witness for Legion family members. However, the support shown for the soldiers brought comfort to Debra.

“It was sad that these soldiers are going to be missing their families, but on a positive note, I saw the community come out to support these soldiers, including their employers,” said Debra, a member of Auxiliary Unit 128. “It was such an inspiring experience to see these soldiers, who have given their time and their commitment and basically are allowing their lives to be risked to make sure the rest of us Americans, who are here back at home, are safe.

“It’s nice for them to know that others have been where they are and are willing to come out and continue to support them. And to remind them if they need a family support group, American Legion posts are everywhere.”

The impact the Legion family presence had was felt a few days following the deployment ceremony when Baker was contact by the National Guard's resource group to help assist a family in need.

"Just by taking time to show up (to the deployment ceremony), talking to the soldiers and their families, letting them know who The American Legion is, we were there to help," Baker said.