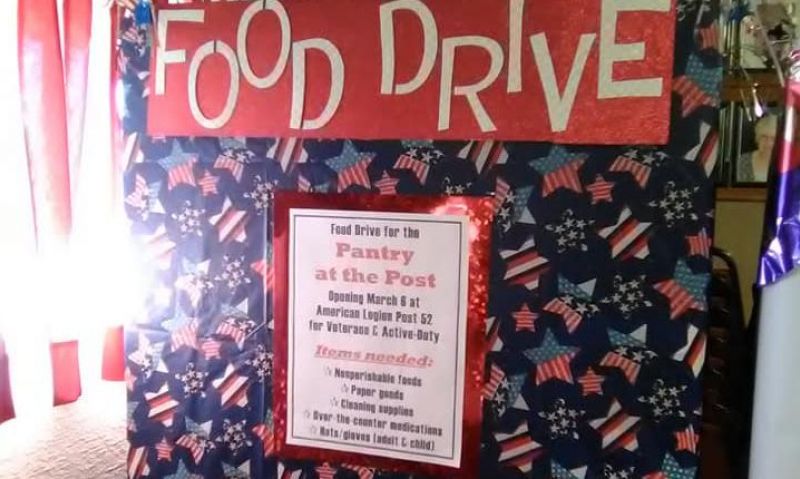 Suzan Kaye, a member of Alley-White American Legion Auxiliary Unit 52 in Mountain Home, Ark., spends part of her time volunteering at an area food pantry. As the coronavirus pandemic moved into the area, Kaye saw the traffic at the pantry continue to grow.

So Kaye and fellow members of Post 52’s American Legion Family decided to do something to help: create their own food pantry for local veterans and active-duty military families in need of food assistance.

The Pantry at the Post will open March 6 at Post 52, which is different than what the original plan entailed. Kaye, who serves as Unit 52’s first vice president and chairs multiple committees, said the original plan was for the pantry to be a part of a new veterans shelter and resource center to be opened in Mountain Home. But Kaye said she was notified in December the pantry wouldn’t be opening when the shelter opened in a few months.

Her experience at the food pantry convinced Kaye the pantry couldn’t wait. “I’ve seen the population of veterans that come to us for food … grow quite by a large number, by a good 20 percent over years in the past,” she said. “I decided that our veterans couldn’t wait that long for them to open up the pantry in the new building.”

Kaye also applied for, and received, an American Legion Auxiliary Foundation Veterans Projects Fund grant, which assists unit project’s that address a specific, new need that supports veterans and military. She said the grant will be used to provide shelving and other equipment to set up the pantry.

Two food drives have been scheduled so far: Feb. 4 during the community’s Freedom is Not Free program, and Feb. 13 at the post via a drive-thru set-up. The post’s Legion Family also is taking donations.

Kaye said based upon what she’s seen, some veterans won’t ask for assistance until they’re absolutely desperate. When they do finally request help “some of them are very emotional,” she said. “They just really don’t want to be there, but it’s a they-have-no-other-choice kind of thing. I do see that often.”

Kaye is hoping having The Pantry at the Post will make it easier for veterans and military personnel to ask for help. “I think it’s going to be amazing (to provide assistance),” she said. “We’ve got probably 15 people already signed up to volunteer here, a mix of Legion and Auxiliary members, plus a couple of people outside of the (Legion Family) who want to help, too.

“We’ve had good results looking for cash donations. We’ve got food coming in every weekend. I think everybody’s really excited about this. I can’t think of a better thing to be doing right now.”