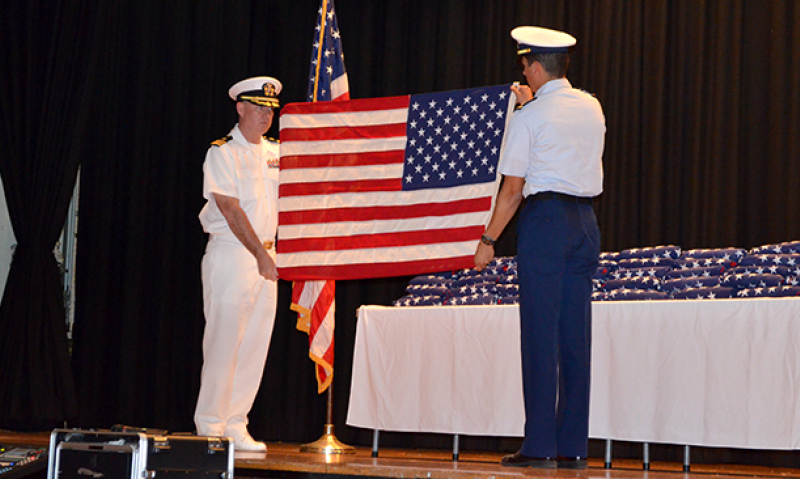 Operation Democracy – a New York-based international charity that spreads the message of freedom, democracy and peace through education – gathered the students to bestow upon them graduation gifts the charity hopes will guide their futures.

Each of the 181 graduates was presented a U.S. flag.

The assembly included local veterans, a guest speaker from the U.S. Coast Guard and music from the Locust Valley High School choir. Members of Howard Van Wagner American Legion Post 962 in Locust Valley carefully folded the flags and helped present them. Post Commander Bob Harrington had a message for the students as they received their gifts. “Take care of your flag,” he said. “This is a beautiful symbol of your country. Respect and honor it.“

“We are honoring our graduating seniors by presenting them with their own American flags, a beautiful symbol of our country,” said Kaye Weninger, President of Operation Democracy and an avid supporter of The American Legion. “The mission of this charity is to educate about Americanism, patriotism and to never forget. This program will remind them that the freedoms they have, as they go out into the world to enjoy, are because of the sacrifices made by the men and women of the military. We owe a debt of gratitude to our military, and educating our students to never forget is a start.”

U.S. Coast Guard Ensign Max Caballero spoke to the students about the meaning of the flag, using as an illustration the American military mission to stop piracy off the coast of Africa. “Here in America, pirate attack is of little worry,” he explained. “Here in America, we have protection against criminal behavior. Many other countries do not have that privilege. We are free to live without the fear because of the freedoms we have, that many other in the world do not have.

“Today you are receiving your own flag – a symbol of America, a symbol of many great things. Upon receiving this flag, I want you to think of one word or one phrase that reminds you of what your flag means to you and what your grateful for. Let this flag go with you to whatever path you decide to embark upon. It’s your job to protect your flag. It’s my hope that it serves as a guide to you – at the very least reminds you of that one thing or phrase that you are grateful for, and reminds you of the patriotic values that are inherent to being an American citizen. It’s my pleasure to help present these flags to you today.”

Learn more about Operation Democracy by visiting www.operationdemocracy.com on the web.