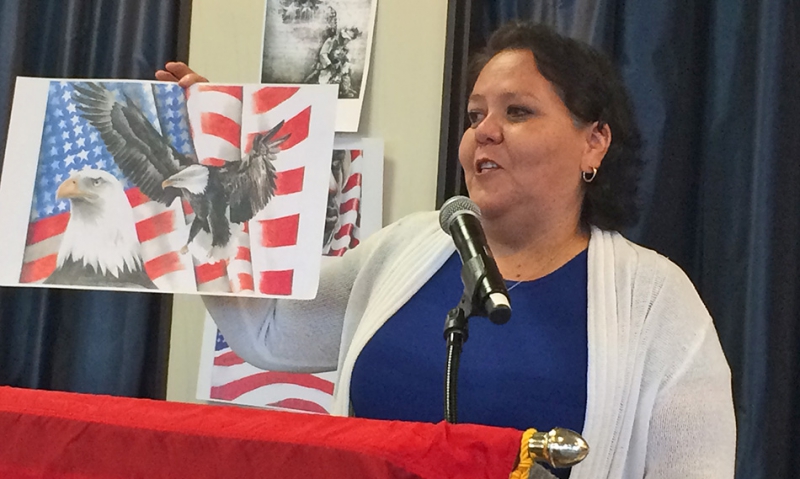 Kaye Weninger, of Operation Democracy in Locust Valley, N.Y., talks to the National Children & Youth Conference attendees about the programs Legion Post 962 has started in an effort to cultivate stronger ties between members, local schools and local businesses. Photo by Jeff Stoffer

Young people in Locust Valley, N.Y., are gaining a clearer understanding of The American Legion post in their community and the values it represents thanks to a growing relationship with local businesses, government, civic groups, schools and active-duty military personnel.

That collaboration reached a crescendo last May when local Legionnaires, a Navy officer and a Coast Guard ensign presented 181 graduating seniors of Locust Valley High School with properly folded, stitched U.S. flags (purchased from American Legion Emblem Sales) in a special assembly that is on its way to becoming an annual year-end tradition.

Speaking at the American Legion National Children & Youth Conference Saturday in Indianapolis, Kaye Weninger, a clothing store manager and former president of the Locust Valley Chamber of Commerce, shared the way she has worked with Howard Van Wagner American Legion Post 962 over the last decade to connect the dots between the veteran community, young people and businesses. Each year, activity after activity, the relationship grows stronger.

“Howard Van Wagner American Legion Post 962 is my biggest support group in our village,” Weninger told attendees. “They inspire me to want to do more for veterans, and I am honored to be able to work with them on these educational programs.”

Weninger said the alliance took root shortly after she learned that in 1947 Locust Valley Legionnaires and community members filled boxes with school supplies, candy, socks and other items and shipped them to the war-battered French town of Ste. Mere-Eglise. That program was called Operation Democracy, and it helped launch a sister-city program that would grow to involve more than 200 U.S. communities after World War II. When Operation Democracy was rekindled in 2006, along with a revival of awareness about the sister-city relationship with the Normandy town, Weninger was asked to speak about it at the Legion post.

There, she discovered that veterans in her community were meeting in a building that had seen little in the way of improvement since the 1950s. Following that, Weninger brought a group of village officials to the post home and was able to obtain $50,000 in community-development funding to renovate it. “I explained to them that these veterans fought for our freedoms and served our country, and they deserve a better building,” Weninger said. “The village agreed that this was important and budgeted for it, with a cap of $50,000. I really had no idea how much it would cost, but I believed in my heart that we would find a way to get it done.”

Soon into the project, it was clear that $50,000 would only cover about half of the cost. But when the community understood what was going on, through the local newspaper, the chamber of commerce and by word of mouth, private donations poured in, as did volunteer commitments and materials provided at cost. By 2008, Post 962 had a new home, and the Legionnaires and local community were reacquainted with the power of working together.

That relationship has included:

Operation Democracy, Weninger explained, has served as a conduit between the post and the community, as well as a raiser of funds necessary to activate patriotic programs.

Flags for Freedom is such a program. Weninger said her employer, J. McLaughlin, offered to donate a percentage of sales to the cost of the 181 flags for the graduating seniors. That and other donations came within about $800 of enough money to make the purchase from Emblem Sales. Post 962 paid the remainder.

Members of the post gathered before the distribution to properly fold the flags and to place each inside a box, along with a pocket U.S. Constitution and Declaration of Independence, as well as a certificate of congratulations.

Parents and students alike called Weninger, the post and the school to express their appreciation for the flags and the assembly.

That event led to the Post 962 Color Guard’s participation in a 9/11 Locust Valley High School football game and remembrance ceremony three months later, which included display of a 20-by-30-foot U.S. flag, bought from Emblem Sales by Operation Democracy. Legionnaires filled the stands of the game, Weninger said, noting that “as each one of the kids passed them, they saw them in their caps, and stopped and thanked them for their service.”

“Kaye has such great ideas, and she really knows how to get our community involved in projects which center around veterans,” Post 962 Commander Bob Harrington said. “She is one in a million, and her support means so much to our post. The Flags for Freedom program at our local high school turned out to be very meaningful. And knowing Kaye, she still has more ideas in her repertoire.”

Projects to support veterans and connect young people with the Legion, Weninger said, are “getting easier and easier” in Locust Valley. “When it comes from the heart, the community will help.”