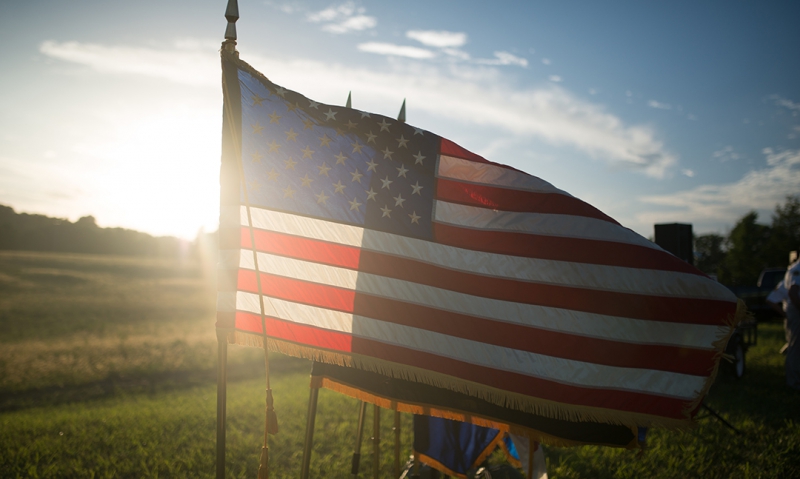 The American Legion believes in the U.S. flag and everything it stands for, and Legionnaires who fought for the nation’s symbol take deep pride in it. To continue its flag-protection efforts, the Legion’s National Executive Committee adopted a resolution at its recent Fall Meetings in Indianapolis that outlines the organization's expectation for rendering proper respect to the flag during Legion program participation at the department and national level.

Resolution 16 – brought forth by the Americanism Commission – also comes in light of recent actions by professional athletes, and now that of several youth sports teams, who are kneeling during the national anthem out of protest.

“The American Legion does not deny the right to protest, for that is a privilege given to all citizens of this great nation that is protected by our military and the service of our membership to defend our democracy,” said Richard Anderson, Americanism Commission chairman. “’To foster and perpetuate a 100 percent Americanism’ defines our responsibility to instill character, citizenship and sportsmanship, among other values. Resolution 16 defines only a small commitment to our youth, to maintain the values upon which The American Legion was founded.”

As stated in the resolution, The American Legion expects participants of its programs to show proper respect to the U.S. flag at all times, including during the national anthem. It recommends for department and post leaders of all Legion programs to clearly state to individuals in advance of program participation about the organization’s expectation for respect of the flag. If a participant involved in any Legion program “cannot or will not” meet the Legion’s expectation, the resolution states that “the individual should not be a participant in American Legion programs.”

“While we cannot mandate this resolution to our respective departments, we hope that this will be a guideline for them to respond in a similar manner (as national) to teach and respect the honor and rights of American citizenship and its responsibilities,” Anderson said.

For individuals participating in American Legion programs at the national level, the resolution states that those who “cannot or will not” meet the organization’s expectations for proper flag respect “will be removed from the program and not be allowed any further participation.”

“The resolution is going to set an example for our youth, and our youth will lead by example, for respecting our flag and respecting our national anthem,” said American Legion National Commander Charles E. Schmidt. “And hopefully our youth, through our American Legion programs, will be examples for those professionals who choose not to respect our flag and our national anthem.

“That’s what The American Legion does – we are building great role models for the future of this organization and for this country.”