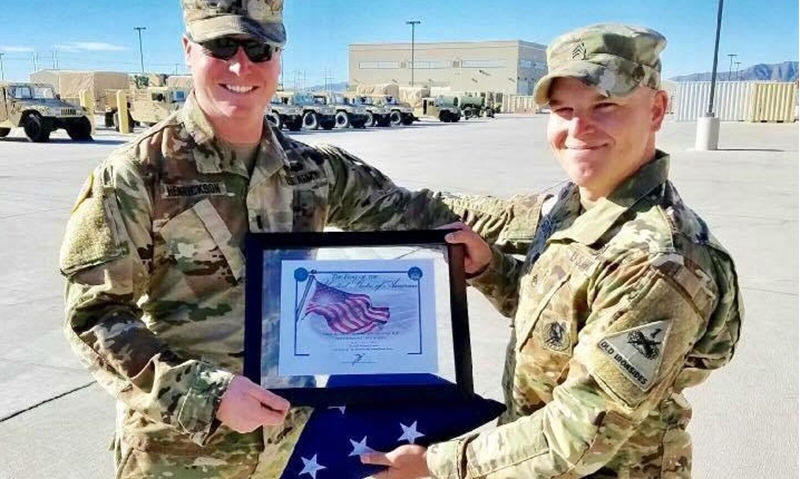 When he was commissioned into the U.S. Army in 2014, Jordan Henrickson received a U.S. flag from his grandfather, a U.S. Army veteran who Henrickson describes as “My No. 1 fan. When I was in high school, he would be at every single one of my cross-country and track meets. He was very proud of me.”

Henrickson said his grandfather also would likely be very proud of what his grandson has been able to do with the flag. The flag has flown on military missions, over national landmarks, and in 21 countries throughout the world – all because of Henrickson’s efforts.

A member of Berg-Hemker-Olson Post 51 in West Salem, Wis., Henrickson said he saw a post on The American Legion Department of Wisconsin’s Facebook page about a U.S. servicemember stationed in Afghanistan who requested that U.S. and state flags be sent to him so he could fly them while deployed.

“I took him up on it. It turns out he was three weeks from leaving, so he gave me the contact information for this next guy. I sent (the flag) to him. He flew it in like eight medevac missions in a Blackhawk helicopter. He certified it and sent it back. I thought it was just such an incredible thing.”

Henrickson wanted to see who he could keep sending the flag to; the flag ended up flying in places like Kuwait, Jordan and Iraq.

“After that it just took off. It was flown over the Pentagon, the U.S. Capitol, Arlington (National Cemetery), the Wisconsin State Capitol, Camp David, the U.S.S. Arizona Memorial – all those places within a year. It just kept going and going.”

This week the flag arrived at the U.S. Embassy in London after having flown in Australia, making it what Henrickson believes is the only flag to ever fly on all seven continents.

Henrickson has set up an Instagram account with pictures of the flag flying in different locations, along with information on where the flag has been and where it is headed next. He tries to plan where the flag will be flown at least six to 12 months out and then reaches out to locals to agree to fly it.

“I’ve never been turned down,” said Henrickson, who pays for all of the postage to ship the flag. “Everyone just wants to be a part of it because they think it’s a great story.”

Henrickson is a lieutenant stationed at Fort Bliss, Texas, and plans on making the military a career. He credits Wisconsin’s Badger Boys State program – in which he went through as a participant and then spent five years as a counselor – for leading him to the military.

“Badger Boys State honestly changed my life,” Henrickson said. “It’s such a phenomenal program. I cannot speak (highly enough) of it. It was just an eye-opening experience that showed me and 700 17-year-olds in Wisconsin the sacrifices people have made for us.

“The American Legion gave me the inspiration to start this journey.”

He wants to continue his flag’s journey for as long as possible. “The goal now is to try to get it to reach every country in the world,” he said. “It might be far-fetched, but that is the goal. There’s 196 countries … and my goal is to get it to all of them. I’m pretty motivated to keep going for awhile.”

For a map of where the flag has been, click here.