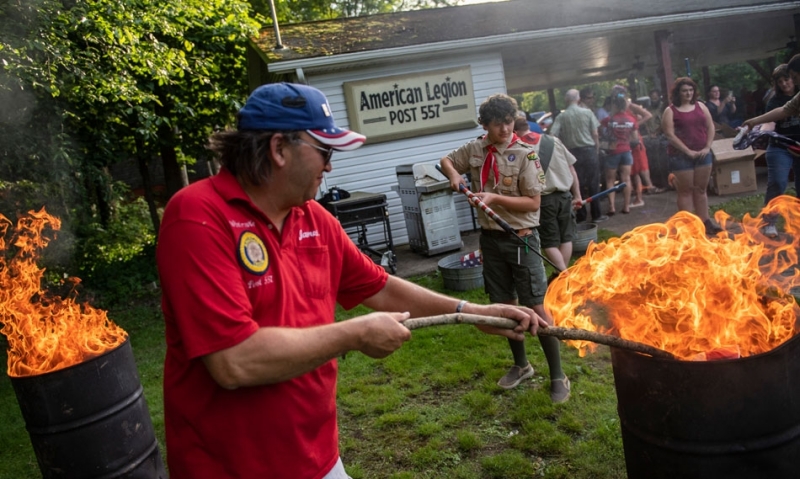 More than 100 Legion Family members, Boy Scouts, community members and others joined together to give more than 500 tattered American flags the proper sendoff on June 14 at American Legion Post 557 in Wintersville, Ohio.

At the post’s annual flag retirement ceremony, one by one flags were dipped in kerosene and safely burned in a barrel. About 30 youths from two Boy Scout troops and Young Marines were among those who participated in retiring the flags.

Lewis has a vision for what a successful flag etiquette program would look like in her community.

“There wouldn’t be a child in this community who didn’t respect the flag and respect what it stands for but they would know the proper handling and care,” she said. “We’re not there yet but with our passion and willingness to do these types of events, we’ll get there eventually.”

Such community events are vital for Legion posts, said Past Department Commander Dave Hilliard, a member of American Legion Post 274 in Steubenville.

Hilliard said that any post — even those smaller than Wintersville — can have successful community events. “As long as the posts work their programs, they will grow. I have a small post and we are growing. When we started growing and getting into our community, the community started embracing us. Now, we are getting younger veterans who want to be a part of the Legion. Small posts can grow and serve their community by working programs like this.”

Retired Marine Sgt. Jack Ernest gave a 20-minute address before the ceremony in which he educated the youths on the colors of the flag, proper etiquette and more.

“It’s not just a piece of cloth,” said Ernest, a Vietnam War veteran who has made more than 40 humanitarian missions to that nation. “When I see the color red in our flag, it means so much more to me than that. Oftentimes, when I recite the Pledge of Allegiance, I have trouble finishing because of what I see in it. I begin to choke up, tear up and sometimes cry.”

To Ernest, the red represents Terry, a fellow Marine he served with in Vietnam.

“The fighting was fierce that day,” Ernest recalled. “Many were killed that day. Many of us were wounded. When the fighting had stopped, I yelled for Terry. He never answered me. When I crawled over to where he had taken up his position, I soon realized that Terry would never again be able to stand or to say, ‘I pledge allegiance to the flag.’”

Ernest concluded with a warning to the future generations in attendance.

“It’s really cool,” said Clayton “Zeke” McGalla, leader of Scout Troop 3. “We knew there was a proper way to retire a flag. We didn’t know how they were going to do it. I thought it would be a good thing for the boys to be a part of.”

McGalla said his Scouts would talk about what they learned when they reconvened later. There were many valuable lessons to take away.

“They need to maintain the path that people like Jack and people before him and other veterans have laid for them,” said McGalla, whose son is a 100-percent disabled veteran. “Some of our Scouts might go on to defend the flag wearing a uniform. I just want our boys to leave here knowing that it is not simply a flag. There are many men and women who gave life and limb, my son included, so that we can be free and be able to retire a flag in freedom and not in secret.”