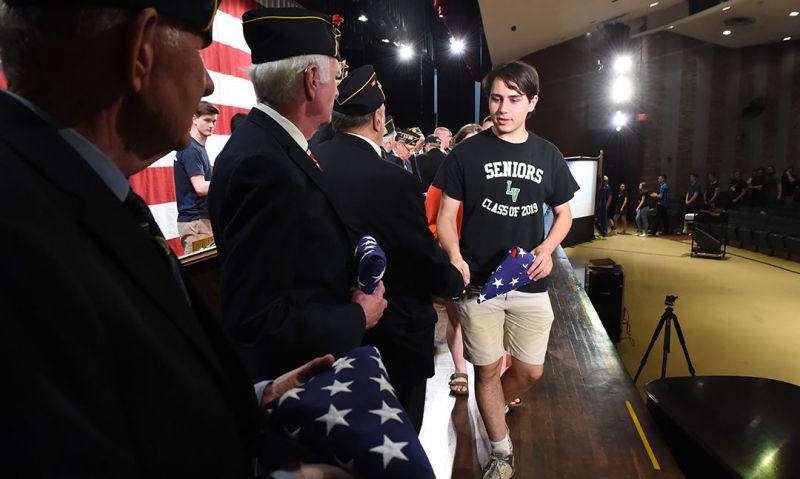 Five years ago, Kaye Weninger of Locust Valley, N.Y., had an idea to connect dots between The American Legion, local businesses, the high school, the U.S. flag and an association she helped revive into one expression of appreciation for all who serve in uniform and the banner under which they do.

Thus was born Flags for Freedom, coordinated by Operation Democracy and supported by Howard Van Wagner Post 962 in Locust Valley and John Spittel Post 1285 in nearby Bayville.

Since then, the program has evolved in multiple ways that came to a poignant crescendo last Monday when more than 150 graduating seniors received from local Legionnaires 3-by-5-foot cloth U.S. flags purchased from American Legion Emblem Sales. The fifth of these distributions since 2014 was made more meaningful because on April 8, 2019, a graduate of Locust Valley High School (LVHS) lost his life in Afghanistan after a roadside bomb attack as he was serving in the U.S. Marine Corps.

The ceremony at the high school, attended by the mother of Marine Sgt. Robert Hendriks, was titled a “Memorial Day Remembrance Program.”

“As a community, we understand that we are able to be here today and live our lives because of the sacrifices that Robby has made,” LVHS student Caitlin O’Hare said in tribute to the 2012 graduate who enlisted with the U.S. Marine Corps shortly after he graduated. “With the spirit of our program today – respect for the flag, freedom, service and America – please join me in applause to recognize Sgt. Robert Hendriks, a true, selfless American hero, and the Hendriks family, for the willingness to make the greatest sacrifice for the benefit of us all.”

In addition to the flags, graduates were presented copies of the U.S. Constitution and the Declaration of Independence, all in honor of those who serve and have served. “Our program is dedicated to our seniors and in honor of our veterans, through the efforts of Operation Democracy, to say thank you to our patriots and service members,” LVHS Principal Patrick DiClemente said. “The effort is to send seniors ahead, at this Memorial Day time, when we honor the lives of past service men and women with an enhanced understanding of dedication and selflessness of individuals who commit, or have committed, their service to America.”

The event also provided an opportunity to recognize four LVHS students who have enlisted to serve in the U.S. armed forces after graduation, including Tom Hogan, who participated in New York’s American Legion Boys State program and has been accepted into the U.S. Military Academy at West Point.

“School needs to be well-rounded and really support the fact that everyone has an opportunity,” DiClemente said. “It could be that a student feels successful in a math class. It may also mean a student is a successful musician or athlete or successful in heating and ventilation. We all take different pathways, but we are going to be successful and work hard.”

The students received a message from retired U.S. Air Force Maj. Gen. Eric Rosborg, a 1971 graduate of LVHS, who donated two flags that were in service with him during combat operations in the Middle East. “Your flag is your touchstone, the symbol of all Americans, and a reminder that your future is made possible by a long history of service and sacrifice,” Maj. Gen. Rosborg said in a statement presented by the principal. “Our founders established a country like no other. Our flag does not stand for government. It does not stand for government power or ideology or military conquest. It represents people.”

“We’re talking about a lot of different things today,” Marine Corps Maj. Patrick Kelly of nearby Oyster Bay, N.Y., told the students. “We’re talking about the flags we are going to take forward with us when we leave and graduate. We are talking about the service of servicemembers and veterans in our community. We touched on the service of one of your fellow alumni who was killed in action just a few weeks ago. One of the things we talk about specifically, when we are discussing the American flag, is how blessed we are. There’s a lot of guys around the world today in very hot places, with a lot of heavy equipment on, and I want to make sure you keep that in mind as you look at these flags today. This flag is one of the only things they have that brings them comfort, and they are thinking about people like you at home.”

Early in the program, acting Superintendent of Schools Dr. Carl Bonuso reflected on the flag’s meaning to him as he trained at Fort Sill, Okla., in the middle of the Vietnam War and what it meant when, on one assignment, he presented a folded flag to the mother of a helicopter pilot who lost his life in the war. “Fifty years later, I found myself watching another family suffer through that,” he said, referencing the family of Sgt. Hendriks.

“We ask all of you to remember those who made the great sacrifice, and what that truly means,” Bonuso said. “Do not surrender this day to sorrow. Indeed, they made their sacrifice so as to protect our rights to a life filled with liberty and enabling us to pursue happiness. They have given you today. They have given you tomorrow… and the day after that and the day after that, so that generations that follow could enjoy these liberties.”

Weninger, whose Operation Democracy portfolio includes a “Painting for Peace” art exchange with students from Locust Valley sister city Ste. Mere-Eglise, France, and other activities, said, “I really do think we are making a difference. I wanted to teach students who our veterans were, who our active-duty soldiers are, and I wanted to educate them about what Veterans Day was, and what Memorial Day meant.”

The Flags for Freedom program, in which Legionnaires from Locust Valley and Bayville gather in advance to fold all the banners and prepare them for presentation, offers an excellent opportunity for members of the community in general to connect with the school, DiClemente said. “It shouldn’t be that the only time older people come back to the school is for a reunion. I really appreciate The American Legion, which has been open to bridging the gap.”