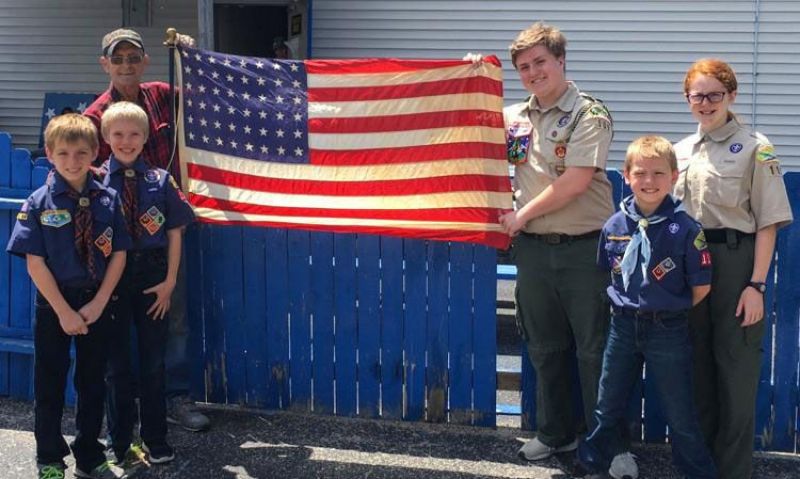 In the Southern Minnesota city of Austin, American Legion Post 91 is known as the place to drop off U.S. flags for disposal. Six-time Post Commander Roland Hanson estimates that 2,000 flags are disposed of properly during ceremonies conducted by the post on Veterans Day at nearby VFW Post 1216 and on Flag Day at Post 91.

During the most recent disposal ceremony, Hanson came across a special flag – one that allowed him to give a history lesson to the Boy and Girl Scouts who annually assist with the ceremony.

While prepping the flags for disposal – some already folded and ready to burn by the Scouts – Hanson noticed a flag that was a little different than the rest of the inventory. But it was one he was well familiar with, having said the Pledge of Allegiance to it many times in high school.

“As soon as I picked it up out of the box and held it up, I said ‘oh boy,’” said Hanson, a Vietnam War Army veteran. “I saw six stars going down and eight stars across. I knew this was something that I had pledged to for many, many years myself.”

The flag was the symbol of the United States from 1912 – after New Mexico and Arizona were granted statehood – until 1959 with the addition of Alaska. It had the second-longest life of any version of the U.S. flag; the current 50-star version has been in place since Hawaii was granted statehood on Aug. 21, 1959.

“I held it up and I asked (the Scouts), ‘What do you think is wrong with this flag?’” Hanson said. “They said ‘wow, that’s in pretty good condition. Why would we want to retire that?’ I said, ‘Well, we do have to retire it because there’s only 48 stars on this flag.’ They were all in awe. They’d never seen one before.”

That provided Hanson the opportunity to teach the Scouts a bit more about the flag. “I wanted to do a little bit of education,” he said. “It was probably one of the greatest moments in my (American Legion) career. I like to teach our youth what Americanism is all about. And obviously taking care of our American flag is one of them that’s top of the list in my book.”

Hanson said the flag was still attached to part of a staff and that he’d like to try to locate the rest of the staff. After that, he’s going to donate the flag to the Mower County Historical Society in Austin.

Properly disposing of U.S. flags is a responsibility Post 91 takes seriously. Hanson said a local car club built flag disposal bins for the post that he said “look like post office boxes. Sometimes we have to empty our bin four or five times and put them in boxes in storage until either Flag Day or Veterans Day.”

Conducting two ceremonies a year allows the post to “retire our flags with dignity,” Hanson said, “so that we don’t find them in ditches and garbage cans … to disgrace our flag.”