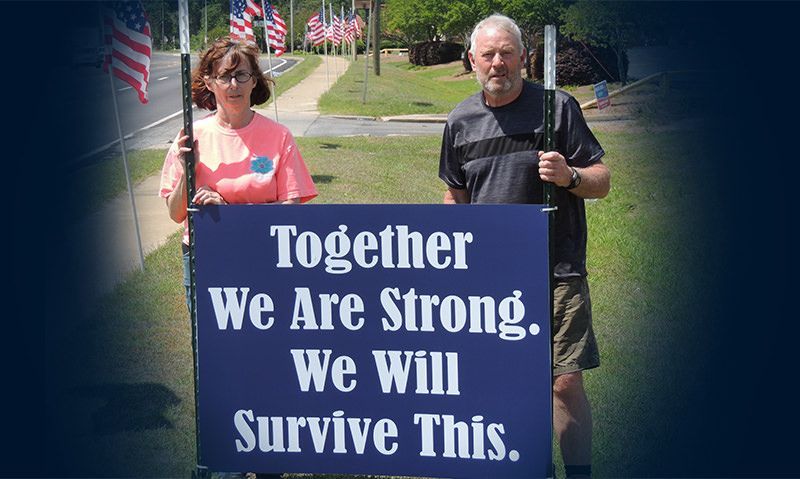 American Legion Sylvester Post 335 has been active in its community for several years, including sponsoring veterans breakfasts and assisting in food donations. Most recently, the post has teamed up with the Worth County School District and area churches to distributing thousands of breakfast and lunch items to local children.

And in that same time period, Post 335 has been responsible for putting up a line of 300 U.S. flags up and down U.S. Highway 82, a busy part of the Georgia-Florida Parkway and the main roadway through Sylvester, on holidays such as Memorial and Veterans Day. The signs normally remain up for a week.

But with the coronavirus forcing U.S. citizens to stay at home and socially distance themselves, Post 335 Legionnaire Paul Greer thought the Sylvester community could use a shot in the arm of unity, hope and patriotism. That meant Greer, his Australian shepherd Zeke and four other Post 335 American Legion Family members spent the morning of April 6 installing the 300 3x5-foot flags every 15 feet along U.S. 82 in Sylvester, alternating from the north to south sides of the highway.

With the flags was installed a sign reading “Together We Are Strong. We Will Survive This”; another sign, with the message “America United We Stand!” with the name of Post 335 and the emblems of all four members of the American Legion Family, also will be installed.

New flags were installed on the poles prior to placing them along the highway. Observing proper social distancing and getting advance permission from the Worth County Sheriff’s Department, it took the volunteers three and a half hours to get all of them placed.

Humphrey said it probably wouldn’t have taken as long had several members of the community not stopped by to thank the Legion Family members and take pictures of the flag. And many truck drivers traveling along the route made sure to blare their horns as they passed the patriotic display.

The post has since gotten letters and social media messages thanking them for their efforts. Members of the Worth County Health Department sent a note that read seeing the sign and flags “touched all of us. We appreciate the love you have not only for Worth County but for everyone that comes thru and sees the flags and uplifting sign. Post 335 is such an encouragement all year but especially during these uncertain times.”

“These are only small things,” Humphrey said. “However, small things, like pebbles being added to a glass of water, raise the level of hope in your area.”

Greer said the flags will remain along U.S. 82 “until this thing is over. We had a big storm come in (April 12). Monday morning after the storm not a flag had fallen. We had winds of 40-50 miles an hour. A flag never hit the ground. They were all flying just as pretty and straight.