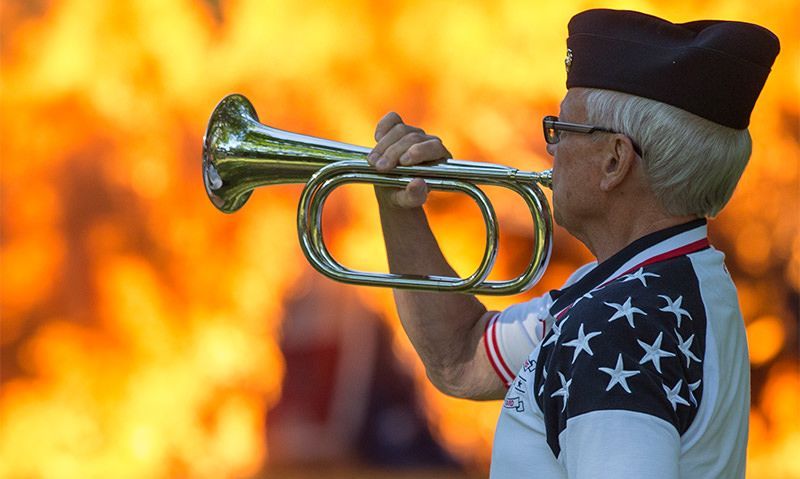 An unseasonably cool June 13 evening and the tree-line La Place recreational area in rural Greenfield, Ind., was the backdrop for a patriotic ceremony two years in the making that wasn’t going to be denied because of the coronavirus.

With proper social distancing in place, members of three Greenfield veterans service organizations – including Dale E. Kuhn American Legion Post 119 – came together on the eve of Flag Day to properly dispose of between 2,500 to 3,000 U.S. flags no longer serviceable.

The disposal ceremony has gone on “for years,” said American Legion Past National Commander Butch Miller, who is still a member of American Legion Post 364 in Virginia but became active with Post 119 after moving to Indiana. But the 2019 ceremony had to be canceled because of weather.

After Post 119 was able to conduct a virtual Memorial Day ceremony, there was no doubt this year’s disposal ceremony was happening. “Having had that (Memorial Day) experience, this was a piece of cake,” Post 119 Communications Officer Kurt Vetters said. “And if (area veterans organizations) don’t do this stuff, nobody does it. It’s our responsibility to continue traditions that have really gone on (for decades).

Post 119 teamed up with 40&8 Voiture Locale 1415 and Brewer & Culley VFW Post 2693 to prep the flags, conduct the ceremony and then ignite the flags placed along a large rack. The Greenfield Veterans Honor Guard provided the flag detail. 40&8 1415 Chef de Gare Steve Fox, a member of Post 119, said the flag ceremony is an example of how well the local veteran service organizations work together. “Many of us are in multi-organizations, so we have good communication,” he said. “We try to include all the veterans organizations in everything.”

Miller said ceremonies such as the Greenfield one “are a way of educating the public. A lot of people … they don’t understand the proper way that you dispose of a flag. A lot of people just think … if you fold it up all nice and neat and put it in the trash that’s fine. It’s not. So we do it every year. It’s for the education of the general public. And it’s another way of showing the local community the veterans are here and we’re doing a lot of things behind the scenes. We don’t do it for fame and glory. We just do it because it’s the right thing to do.”

Fox said during the ceremony that the flag’s true value isn’t physical. “It’s real value is beyond pricing,” he said. “It’s a precious symbol of all that we and our comrades have worked for and lived for and died for: a free nation of free men true to the faith of the past, (and) devoted to the ideas of the practice of justice, freedom and democracy.

Around 50 area residents came to watch the ceremony, which was also was streamed live via Facebook. “I can’t tell you how many packages – individual, folded flags – we took. I took ones that were carefully wrapped in Saran wrap,” Vetters said. “It took us three hours to get (all the flags) set up. But with every one, you can tell (someone) for the most part took some care. So it’s our responsibility to make sure that we continue that.”

Fox said watching the thousands of flags burn is “emotional for me, a little bit. I’ve got 30 years in the service – I’m still in currently. This is what it was all about for me my whole life. I went into the service when I was 18. I’ve fought for that flag for what it stands for. That’s our freedom. If you don’t like your job, you quit and go work somewhere else. If you’ve got something to say, you can say it. That’s what that flag means.”