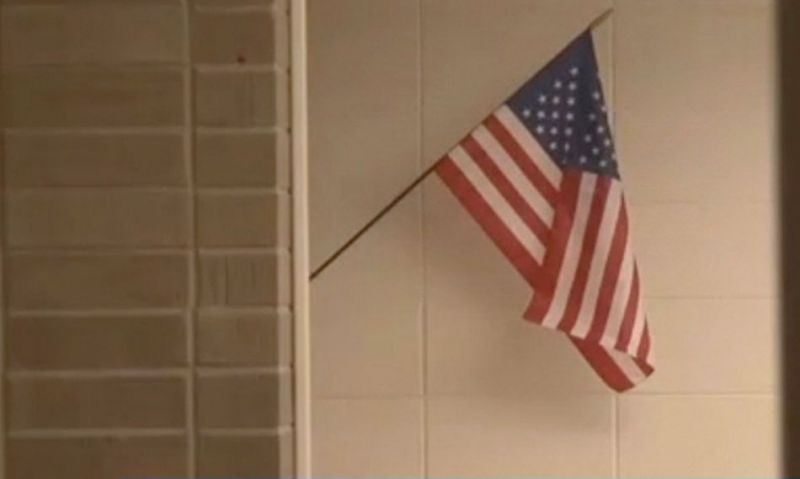 Montana state law requires a U.S. flag in every school classroom – but only if schools can afford it or have them donated. A newly adopted resolution by the American Legion Department of Montana will ensure that the Stars and Stripes are displayed in every classroom of the more than 820 schools across the state.

The “Stars and Stripes in Every Classroom” resolution was adopted by the Department of Montana’s Executive Committee during its fall conference in October. The resolution originated at Andrew Pearson American Legion Post 117 in Billings as a joint effort between the post and the Office of Public Instruction to raise funds for flags in every classroom.

“On June 14, 1923 The American Legion brought over 60 civic organizations together to write the U.S. Flag Code and now, nearly 100 years later, we are excited to rededicate ourselves to honoring the symbol of our nation and sharing our respect for our flag with the children of Montana,” said George Blackard, Post 117 adjutant and Americanism chairman. “This is a project that Legion posts across the state can join in on, and together we can promote Americanism and support the children and youth of Montana.”

Together, Blackard and Montana Superintendent of Public Instruction Elsie Arntzez announced the Stars and Stripe initiative on Sept. 11 during a ceremony in Billings.

“We must honor our veterans by having strong civics education programs in schools to educate the next generation about the rights and responsibilities that we enjoy as Americans,” Arntez said. “One way to encourage this is by proudly displaying the Stars and Stripes in every classroom.”

Classroom flags are 16x24 and purchased through American Legion Emblem Sales at $10 a piece by the Department of Montana. Department Commander Jeff Nelson said post commanders and program chairman are being asked to contact their local schools and verify that every classroom has an American flag. And community members, civic organizations and others are being notified of the Stars and Stripes initiative and asked to sponsor classroom flags.

“This initiative is about making the public aware that we need to have a flag in every classroom,” said Nelson, who added that one person in Billings donated $1,000 to the cause. “That’s almost 100 flags that can go out in the classrooms.

“As we grew up, we took it for granted that the flag was always in the classroom. In today’s schools, some of those traditions and customs that we’ve had in the past have been neglected, although not intentionally. Not only is it Americanism and patriotism in our classroom, but it’s getting to spread the word of The American Legion – that we’re active in our community and sometimes kids in school are not really aware of what The American Legion is or what a veteran is. So with the Stars and Stripes initiative, we bring that to the forefront along with exposure to The American Legion. It’s a win-win for everybody in the community.”

Nelson also added that by getting into schools for flags in the classroom, the door is then opened to discuss other American Legion programs, such as Boys and Girls State, the oratorical contest and Legion Baseball.