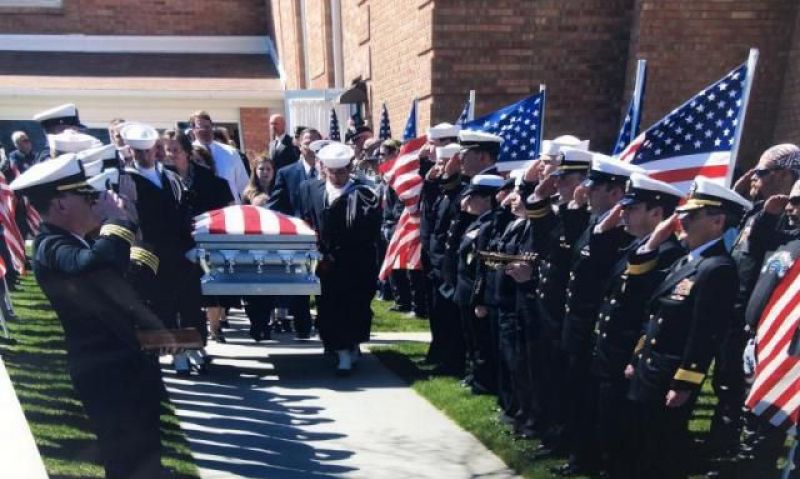 The American Legion would like to hear from you about your pride for the symbol of unity and freedom. Please share your flag moment with photos at Legiontown.org under the heading “Rally Around the Flag.” Or share on your social media channels and use the hashtag #rallyaroundtheflag.

Pamela Hall Cropper of Nampa, Idaho, shared on Legiontown.org that her Rally Around the Flag moment is that of the military funeral service for her son, Curtis, who was killed in Iraq.

“I’m the product of a loving American family. Mom and Dad always taught us to be good citizens and show respect for the flag. One could say I was patriotic – proud of my country and the freedom it represents to the world. However, after my youngest son was killed in Iraq, these feelings intensified.

“On my birthday in 2007, he called from Kirkuk, Iraq. His call is now a treasured memory. The very next day two men in Navy dress blue uniforms came to my home with the news that EOD 2 (Explosive Ordnance Disposal Second Class) Curtis Ralph Hall had been killed in action. A few days later the casket arrived in Twin Falls, Idaho, and my son’s body was escorted by police, a motorcycle service group, and others to a mortuary near our home in Burley. Many came to watch the procession along this 38-mile route. Farmers left their tractors, stood and saluted from their fields as Curtis’ flag-draped coffin passed by. School buses stopped and the children descended to wave goodbye.

“It was Curtis’ sailor friends who, at the cemetery following taps, took the flag from his coffin, folded it into a perfect blue star-covered triangle and presented it to Curtis’ commanding officer. Salutes were exchanged in the most solemn manner as the flag was passed to him. CDR Beck turned, approached, and knelt before me. As he handed me the flag, he emotionally spoke these words, ‘This flag is presented by a grateful nation. It is an expression of appreciation for the honorable and faithful service rendered by your loved one. Please accept my sincere condolences.’

“That flag is now on prominent and permanent display in my home. Since then, whenever I see our flag being publicly displayed, tears come easily and softly to the surface. I cannot help but think of my Curtis and of his sacrifice. In my heart I say, God bless America. May he and others like him never be forgotten.”

Illustrated messages on The American Legion’s website, Facebook page and Twitter feed will deliver daily historical notes, fun facts and voices from history about Old Glory leading up to Flag Day, June 14. These messages are encouraged to be shared.