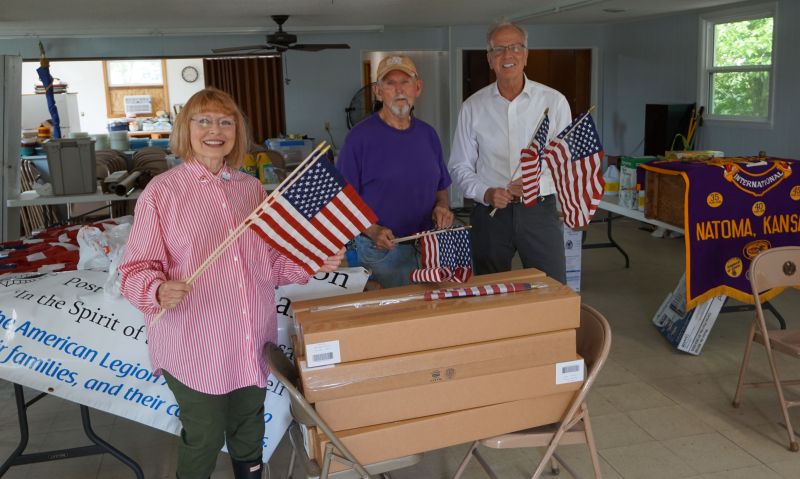 After a severe flash flood ravaged the small town of Natoma, Kan., on May 16, members of American Legion Post 109 and the American Legion Auxiliary were left wondering what to do. The 300 flags they planned to place at four local cemeteries for Memorial Day had been destroyed. Auxiliary President Laah Tucker and Post 109 Commander William Workman were worried they wouldn’t be able to replace the flags ahead of Memorial Day.

Tucker reached out to Sen. Jerry Moran’s, R-Kan., office for help. When the senator heard about The American Legion and American Legion Auxiliary posts’ plight, he personally delivered replacement flags.

“I had the opportunity to surprise The American Legion in Natoma with 300 new American flags to replace the ones that had been destroyed by the recent flooding,” he said. “The American Legion continues to be a centerpiece of the Natoma community, and I am grateful for their dedication to honor our veterans by placing American flags across four cemeteries this Memorial Day. I’d like to thank American Legion Auxiliary President Laah Tucker and Post Commander William Workman for their work ahead of Memorial Day and for all they do for the Natoma community.”

Thanks to the senator’s gesture, the post continued its Memorial Day tradition. Post members made sure each veteran buried in these small, local cemeteries had a flag placed to acknowledge their service. A color guard honored the veterans who came before them.

“I give Sen. Moran credit for responding as rapidly as he did that day,” said Workman. “Sen. Moran has always been supportive of veterans, which I greatly appreciate.”