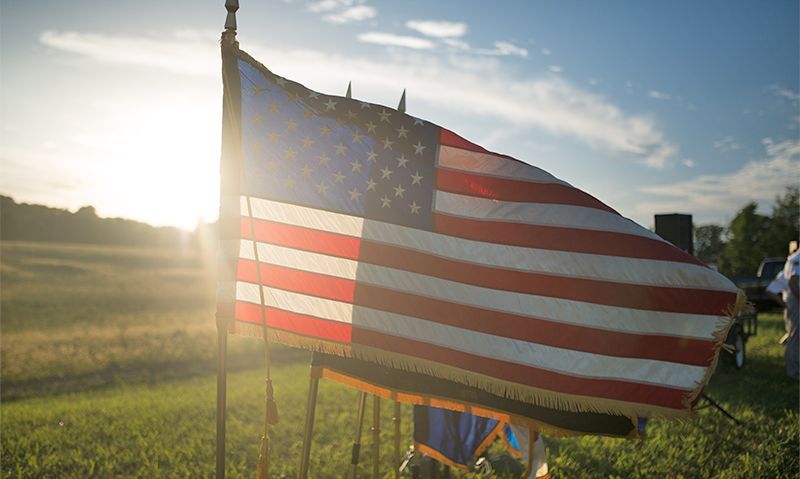 Each year on Flag Day, June 14, American Legion posts nationwide hosts flag retirement ceremonies to properly dispose of unserviceable flags and to celebrate the adoption of the flag of the United States. The appropriate care, display, and respect for the U.S. flag has been a mission of The American Legion for nearly its entire history.

The American Legion has been leading the fight to protect Old Glory with support of an amendment to the U.S. Constitution that would allow Congress to prohibit the physical desecration of the American flag, our nation’s enduring symbol of unity and freedom. In support of The American Legion’s mission, Rep. Steve Womack, R-Ark., introduced H.J.Res.51 Monday, June 14, to coincide with Flag Day – H.J. Res. 51 is a joint resolution that restores the authority of Congress to prohibit the desecration of the United States flag in effort to protect America’s symbol of freedom.

“Flag Day, June 14, is a time when we reflect on the cherished red, white and blue cloth of our nation,” said James W. “Bill” Oxford, national commander of The American Legion. “The U.S. flag is a binding thread through tumultuous times in our nation’s history. Through two world wars, the Great Depression, 9/11, contentious politics, racial strife and a global pandemic, the Star-Spangled Banner serves as a constant reminder that Americans are all in this together. Those simple stars and stripes are unifying symbols for our nation, bridging the divisions that appear in our society.

“The American Legion thanks Rep. Womack for championing the Flag Protection Amendment. Traditionally and legally the American flag had been protected from desecration, and most Americans think that protection should be restored. I hope this bill will gain wide support in these trying times and we will one day soon be able to give this great symbol, which we call Old Glory, the sanctity it has earned through the blood and sacrifices of generations of brave Americans. Protecting this national treasure is a prime opportunity for members of Congress to come together and exemplify the unifying power of service to our nation and to others.”

In a statement released June 14 regarding the reintroduction of H.J. Res. 51, Womack said, “Recognized from near and afar, our flag is the embodiment of freedom and liberty. With hands over our hearts, we salute our enduring banner and the promise it upholds. It has guided troops into battle, steadfastly flown during our brightest and darkest moments, and is placed over the caskets of our heroes who have given all. It means too much to not have the ability to protect it.”

As a part of the Constitution

As a part of the Constitution, the First Amendment guarantees no abridgment of the Freedom of Expression. The Supreme Court has ruled the burning of the flag is protected under this provision. It is dangerous to begin cherry-picking exceptions to Constitutional rights we might be willing to curtail. Having sworn to protect the Constitution, I can't in good conscience support this proposed amendment, which would for the first time narrow instead of expanding the protections in the Bill of Rights.
Submitted by gayspiritwarrio... : Jun 17, 2021 2:33pm

I completely support the

I also agree with

I also agree with gayspiritwarrior... We don't need more laws to financially harass people or thrown them in jail. Give them a reason to respect the flag through education and example. Often, they don't even know what they are doing is not correct. Let's lead them to the truth.
Submitted by bob : Jun 17, 2021 5:01pm

As a combat-wounded veteran

As a combat-wounded veteran and Legion member, I absolutely disagree with making desecration of the flag against the law. It was not a flag we soldiers were willing to die to protect, but the rights that flag represents. Autocracies protect symbols; American soldiers fight to protect the rights represented by the symbol, of which free speech is but one. Any law making desecration of the flag a violation of law is what one expects from an autocracy. It is similar to a dictatorship declaring it illegal to deface a poster of its "worshiped leader". While I hate seeing a flag mistreated, it sickens me even more to see the right to free speech degraded. The quote attributed to Voltaire (although evidence does not support that he ever actually said it) sums up my feelings on this issue: "I disapprove of what you say, but I will defend to the death your right to say it."
Submitted by joemccorm : Jun 17, 2021 5:39pm

Rep. Womack calls the flag "the embodiment of freedom and liberty." He's wrong. The flag symbolizes those values, but it doesn't "embody" or guarantee them. If we sacrifice our freedom to protect its symbols, then the symbols themselves lose their meaning, and we've ultimately traded the very liberty we fought to defend for nothing. It's disappointing that the Legion would support doing so.
Submitted by zack.valentine2... : Jun 17, 2021 11:56pm