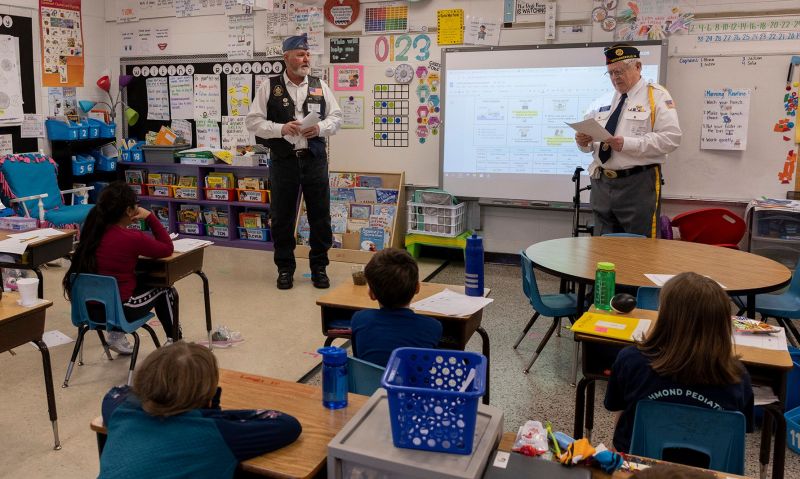 First-grade students in Hanover County elementary schools in Virginia recite the Pledge of Allegiance every morning. But questions of what the words mean, where they come from and why we say them were ones that members of American Legion Post 175 in Mechanicsville wanted to answer for the students through a flag education program.

The program started three years ago when Sons of The American Legion Squadron 175 Commander Jim Oliver approached Hanover County’s director of elementary school education with the idea and was given permission to approach the individual school principals to accept the offer of presenting the program to their students. Oliver addressed the school board in early 2022 to petition the school board to reinstitute the program after COVID restrictions were eased and was again given permission to contact the individual school principals.

“We think it’s very important that our youth have more awareness about the flag, the Pledge of Allegiance, what it means, why we do it,” Oliver said. “Especially we felt in our public school system many students aren’t exposed to any type of that information anymore. I think in our community here, they are. They do say the Pledge of Allegiance, they do have units that talk about that subject material. We are fortunate in that regard but it’s pre-emptive action on our part to make sure that it doesn’t slip away like it has in other communities. That’s why we began the program several years ago and continue it today.”

Since late February, over 500 students have attended the flag education programs and an additional 300 have received flag materials.

“It's been a positive experience all the way around,” said Post 175 Commander George Navas. Post 175 members “are getting a renewed sense of purpose because they are back out in the community, they are educating children, they are getting the word out of who we are, and we are getting a very positive response from all the schools and the folks involved. Which makes us feel really good.”

About six members from the post attend the flag education program at the schools. This includes Navas, Oliver, honor guard members, a Legion Rider and other post members. Each presentation is about 20 minutes in length and is held where the school deems best, whether that’s in a classroom, cafeteria or assembly.

·       Introduce each post member and their branch of service

·       Ask if they have a family member who served. “We get more than 90% hands up,” said Navas when this question is asked. Then the students will say “what branch of service their family served in.”

·       Open it up to questions. Navas said they will ask where flags come from and if other countries have a flag like the United States, or about the state of Virginia’s flag and what it means. And they ask about the Legionnaires’ honor guard uniforms.

Every first-grade student who attends Post 175’s flag education program receives the “I Pledge Allegiance” comic book from American Legion Emblem Sales to help them understand what the words of the Pledge of Allegiance mean and why we say them. And they are given a small flag to take home with them. When presenting the flags, the group says to the students, “You may take it home and place it in your room, or other place you choose. It is provided so you may have your own, personal reminder of how special it is to be … an American.”

Oliver said the post holds three or four fish fry’s a year to fundraise for the purchase of the small flags and “I Pledge Allegiance” comic books.

Before the Legion members leave the students, the group gives them a challenge – to count how many American flags they see on their way home from school. “You see more American flags than you realize,” he said. During a flag presentation March 22, Navas told the students that he saw 14 American flags on his way to their school. “Unless you are looking for them, you don’t realize how many you see.”

For example, while in a classroom Navas asked students how many flags they saw, and they pointed to the one hanging in the classroom. But then he showed them the U.S. flag on the Legion Riders vest, honor guard uniform, etc., and “we actually had seven flags in the classroom. No longer just the one.”

Appreciation to Post 175 members for coming to the schools and educating youth on flag etiquette is visible from the principals, teachers and students. “They thank us, they appreciate it, and they seem excited to have us there,” Oliver said. The post also recently received several thank you letters from the kids. “That’s a positive indicator there that it’s having a positive impact.”

By the end of the 2021-22 school year, Post 175 will have visited or sent flag materials to 12 of the 14 public schools in the county. “Every year it will be our goal to reach every first grade student in the county,” said Oliver, “to keep trying to influence the kids” on flag education and American Legion youth programs.

Post 175 sees this opportunity of getting into the schools as way to reach younger veterans for membership. When the kids bring home the “I Pledge Allegiance” comic book their parents see that The American Legion was in the school, and each school that Post 175 visits puts pictures of the Legion members interacting with the youth on their social media platforms for parents to see.

“It’s another touchstone for us (for recruiting),” Navas said. “Again, we reach in and connect to where veterans are.”