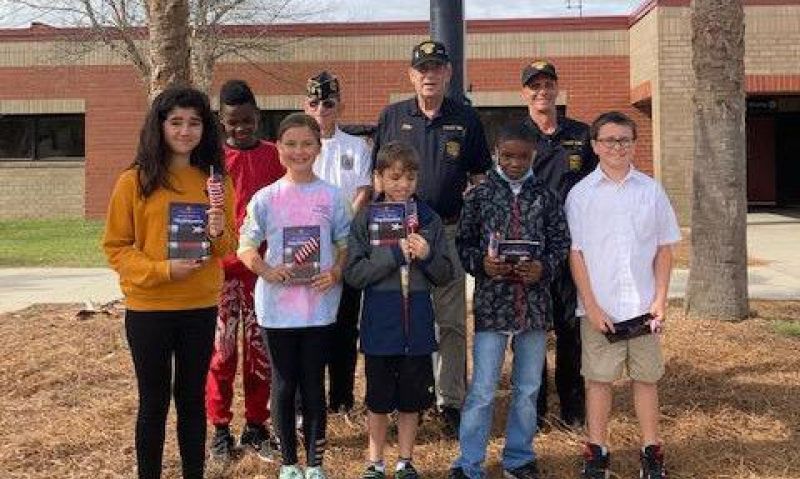 American Legion Post 166 in Goose Creek, S.C., recently provided flag etiquette to youth at Devon Forest Elementary School to fulfill two missions of The American Legion –  promoting Americanism and mentoring youth. The flag education was led by Post 166 Honor Guard Captain Michael Thomas, honor guard member Lewis Harper and past post commander Don Pace, and presented to third and fourth grade students who are part of the elementary’ s Flag Crew. Six students are elected to the Flag Crew each year after volunteering and writing a short essay on why the American flag matters.

The honor guard members taught the students how to properly raise and lower the U.S. flag and fold it, as well as the South Carolina state flag. The students also received a small flag and a copy of The American Legion's “Let’s Be Right on Flag Etiquette” book.

“Americanism is inherent in all the Legion does, and I can think of no better starting point than with Old Glory,” Thomas said. “To the children of the Flag Crew, it's tangible and real. They not only see it but touch it. Whether properly folded or billowing in the wind, they see the results of their own work. Our sessions introduce them to the sanctity of our national colors.

“Mentoring of youth is another Legion mission. Entrusting these children with the task of raising, lowering and folding our national colors properly leads them to assume personal responsibility and take pride in their role. These attributes have the potential to carry over into other facets of their lives and give them confidence to do other productive things.”

Post 166’s flag education program began in 2003 under past post commander Cecil Rash, who “faithfully carried out the training sessions with assistance of other post members and nurtured the relationship with the school in the following years,” Thomas said. In 2015, unable to continue, Rash turned over responsibility of the program to members of the post honor guard “who are continuing the tradition.” This year marks the first time in two years for post members to get back into the schools to provide flag education because of COVID.

“We Legionnaires enjoy and appreciate the enthusiasm the children exude in the training sessions,” Thomas said. “They relish our time together, listen and watch carefully. Then they work hard to perform, and beam at our words of encouragement and praise. We delight seeing them do well and, in the end, it's a win-win for them and us.”

“Our honor guard members certainly take pride in helping the future leaders of this country learn respect for the flag and other patriotic symbols our country holds dear,” said L. David Coates, a Post 166 honor guard drill instructor. “These children will certainly grow up to become the leaders of tomorrow. We look forward to helping to forge a path of patriotism for our local young people whenever we can!”

As The American Legion continues its Rally Around the Flag initiative to instill pride for the U.S. flag and all that is symbolizes –  freedom, hope, pride and unity – we want to hear your stories. Tell us about your pride for Old Glory by sharing your story with photo at legiontown.org under the category “Rally Around the Flag.”