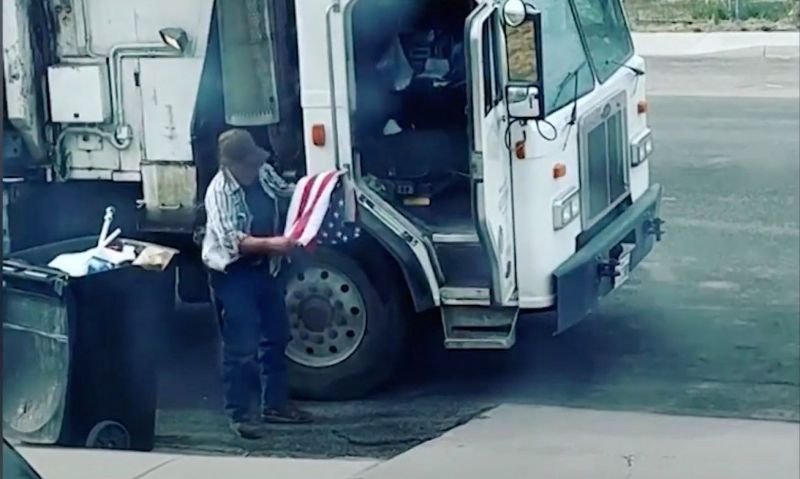 On his daily garbage pickup route, there are a few reasons why Don Gardner will leave his truck – to help the elderly with their trash and to save an American flag from the landfill. In his 11 years on the job, he has saved about a dozen flags.

Gardner’s patriotic action had gone un-noticed from the public eye. That was until recently.

A resident on Gardner’s garbage route saw him leave his truck and walk to her trash can. When the homeowner realized what he was doing, she caught his actions on camera – he pulled a U.S. flag from her trash, folded it and took it with him. She then uploaded the video to Facebook.

“I wanted our community to really see what he did, and to see the care and love that he gave our flag,” said Brooke Cowley to Fox 13-Salt Lake City, a wife of a veteran who on Facebook said she accidentally threw away the flag after cleaning up from Easter celebrations. “I wanted them to see and to give him the respect that he gave to our flag.”

Gardner had no idea his actions were caught on camera until he saw it on Facebook. “They tell me true honor is doing the honorable thing when you don’t think anyone is looking. That’s what I did; it’s what I’ve always done,” Gardner said.

The video has resulted in other residents giving Gardner their unserviceable flags, a local Scout troop asked him to speak about flag etiquette, and he has been asked to help conduct a flag retirement service during the community’s Fourth of July celebrations.

“I have had people tell me that it was emotional for them, watching that video. When I see (the American flag) in the trash cans, it upsets me. To me that’s disrespect to our flag and to our country, and all those who passed and fought under that flag. It affects me because of (the men and women who) sacrificed for our flag and country. I want to give them, our flag and our country, the proper respect.”

With Cowley, Gardner believes it was an honest mistake and that she didn’t realize what she did until she watched him pull the flag out of her trash. “Being a person of integrity, she owned up to it (on social media), she videoed it,” he said. “She used it as a teaching moment for her kids, and she wanted to get the word out that there are proper ways to retire a flag.”

During his next visit to the house, Cowley stood outside with her children and gave Gardner a card with a military challenge coin. “She brought tears to my eyes right there. It was kind of emotional for me at that moment.”

Gardner comes from a family history of military service that inspired him to serve and take great reverence for the U.S. flag.

“If I can show people the proper way to (retire a flag), taking me out of my comfort zone is well worth it,” Gardner said. “I want people to remember honor and respect. The Marine Corps mottos is Semper Fidelis which means ‘always faithful.’ If people are faithful and true to our country and our flag, we have a better country.”