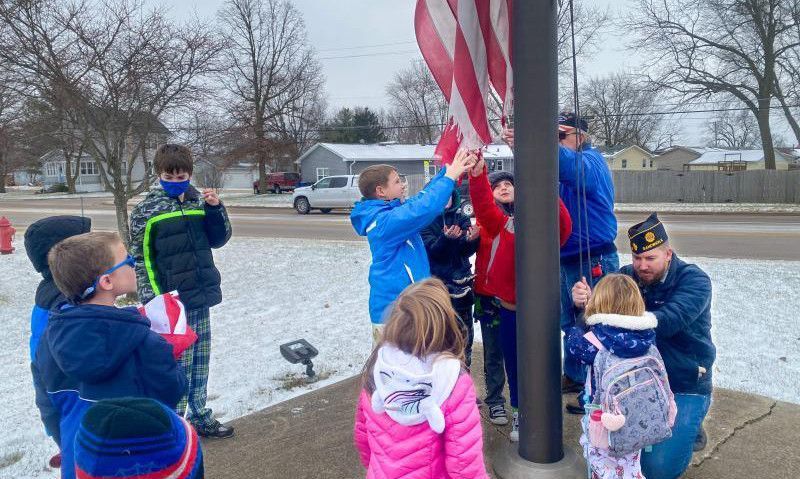 Steven Kreitzer’s 5-year-old daughter, Iva, has respect for the U.S. flag from watching her family lead by example.

“She learned that respect by the flag we fly in our front yard, always making sure it is in its best condition,” wrote Kreitzer, a member of American Legion Post 337 in Hinckley, Ill. “In addition, she has been coming to the Hinckley–Big Rock Cub Scout pack meetings to support her brother and watch how they properly retire tattered flags.”

One day when Kreitzer picked his daughter up from preschool, she pointed to the school’s flag and said, “’Daddy, that flag needs to be changed because it’s tattered.’ I let her know that I agreed.” That night Kreitzer ordered a new American flag to replace the tattered one.

“The next day I was sitting in the pickup line at her school and thought I'd better ask permission to change it out, and then maybe the kids could participate. Hinckley-Big Rock Elementary Principal Mrs. Hervey, she was immediately ecstatic … and that to have The American Legion, Cub Scouts and preschoolers all help was an amazing idea.”

The following week, with a new flag in hand, members of Post 337 educated the preschoolers about the flag, its colors and what they mean. Then each of the preschoolers, including Iva, got to help lower the tattered flag and hoist the new one. Cub Scouts were also there to hold the flags and make sure they didn’t touch the ground.

“This was an amazing program that made a big impact on these preschoolers,” Kreitzer said. “The moral of the story is if you get an idea, run with it as you have no idea the impact it can make. Things don’t have to be big – they just have to be done with the love of teaching others about the values and traditions supported by many Americans and The American Legion.

“The children in the community are watching your example and learning more than you know.”

Kreitzer added that a special thanks goes to others who were “a huge part” of the flag education: Allen Thorson, Matt Hansen, Michelle Hansen, Mandy Kreitzer, Mallory Wassmann and Sharri Hane.