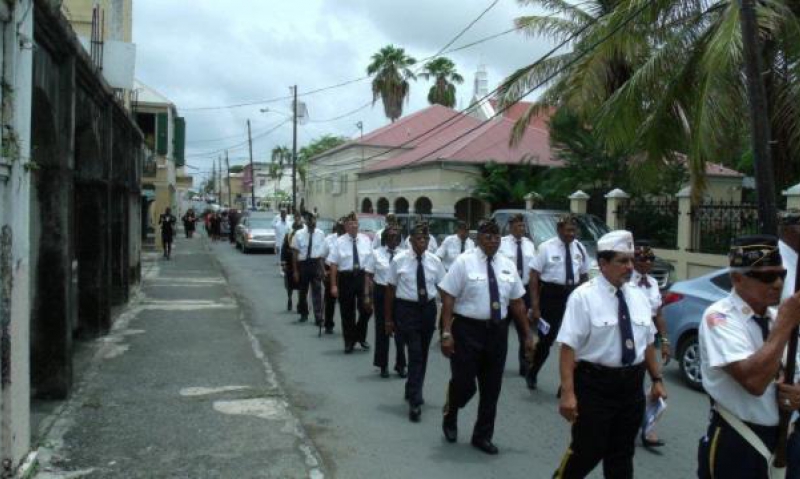 The American Legion is thriving in the Department of Puerto Rico. A number of posts conduct events, help the community, and provide companionship and remembrance for one another and those who came before.

In June 2011, the Legion joined forces with the Department of Defense 60th Anniversary of the Korean War Commemoration Committee, including Col. Clark, in order to recognize all Puerto Rican veterans who had served during the Korean War.The committee returned to Puerto Rico in September 2012, and again invited the Legion to join them while they recognized specifically the veterans from the 65th Infantry Regiment. Joining DoD was Raquel Ortiz, producer of the film “Borinqueneers.” Several of the regiment members were featured in the film. On their visit in September, Clark and his staff visited the veterans home in Juana Diaz, where the Legion joined them once more in recognition of our veterans. It was a moving and humbling experience to see some of our veterans struggle to stand and proudly salute the colonel, and to watch others cry as they received their certificates.

The U.S. Virgin Islands, with posts on the islands of St. Croix, St. John and St. Thomas, are all part of the department. The Legion in the Virgin Islands has established a close-knit relationship with the government and the community, which join in commemoration of all American Legion events.

Post 25 in Camuy worked arduously in obtaining the local veterans cemetery. They are responsible for the maintenance as well as for ensuring that only qualified veterans and their families are buried in the cemetery. The post has strong ties with the local community, and they celebrate numerous events together.

The nation’s most decorated Vietnam War veteran is Jorge Otero, nicknamed the “Puerto Rican Rambo.” Wikipedia says he “earned 38 military decorations and has been called the most decorated U.S. soldier of the Vietnam War.” Otero is the commander of Post 14 in Vega Baja, where he can be found daily providing services to our veterans.

Post 42 in Utuado is the only post to have a military museum. They have also published a book with the history of nearly all the veterans in their town. This is a small town, with a little more than 35,000 people. A Wall of Honor shows the pictures of all Utuadeños killed in action. PFC Fernando Luis Garcia was the first Puerto Rican, and the only one who was a member of the U.S. Marine Corps, to be awarded the Medal of Honor for his actions during the Korean War.

Department Commander Ildefonso Colon Jr. and Sub-Adjutant Nelson Ortiz joined fellow Legionnaires and Vietnam War veterans at a local high school in Juana Diaz, where students in the English class were learning about the Vietnam War.

The government of Puerto Rico recognizes civilians who have gone above and beyond in support of the veterans of Puerto Rico. Laura Montes is an English schoolteacher who started “Operation Uplift.” Through this project, students write poems, stories and letters of inspiration to our wounded troops. They also collect donations to send packages and letters to troops in combat zones. She has received several letters of recognition from units supported by this project. The American Legion was the only veterans organization to submit a nomination.

Members of the Legion attended the signing of an agreement by Secretary of State Kenneth McClintock, Puerto Rico Advocate for Veterans Affairs Agustín Montañez, and the Ponce School of Law to work together to conduct the first census of veterans in Puerto Rico in order to meet needs, improve services and offer greater benefits for veterans and their families.

An annual American Legion Day Open House at Post 47 in Cabo Rojo brings more than 100 members of the community to the Post where information is provided to them about the various Legion programs. Food, music and drinks are enjoyed by all.

In the past year, there have been hundreds of thefts of bronze plaques from veterans’ graves. Legionnaire Sergio Morales has taken the initiative to visit the cemetery in his town, keeping records of veterans’ graves and visiting the cemetery periodically. Providing a presence will hopefully deter thieves.