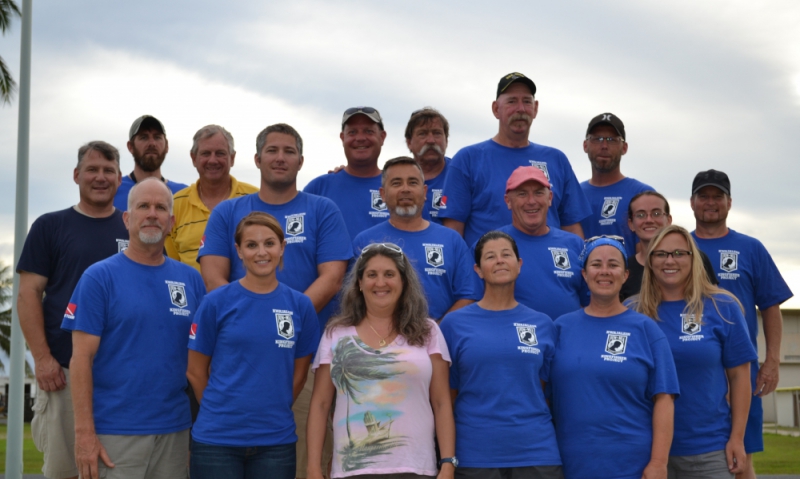 Richard B. Anderson Memorial Post 44, located on Kwajalein Atoll in the Republic of the Marshall Islands in the Pacific Ocean, has taken to heart The American Legion’s emphasis on a full accounting of American POWs and MIAs. A post subcommittee called the Kwajalein MIA Project was started in 2015 to continue and centralize existing efforts to locate World War II-era planes believed to be sunken in the surrounding waters, hopefully leading to the MIA servicemembers listed as manning them.
Volunteers do everything from helping operate sonar and other equipment, to getting a closer look by diving toward possible wrecks. One doesn’t need to be a member of the Legion, or even a veteran, to be part of the group; according to Post 44 PAO Dan Farnham, chairman of the subcommittee, about half of the current 28 members are veterans, and most of them belong to a post somewhere.
Farnham spoke to The American Legion about how the Kwajalein MIA Project, and how other far-flung Legion posts can get started on similar efforts.

1. Who at the post really spearheaded moving the project over there?
I did. Back in 2011 I helped started the search for the Kingfisher. Since this was being done out of pocket, which is expensive given the costs of air travel and things on Kwajalein such as boat rentals, I designed some T-shirts in early 2015 to help raise money to pay for the costs. Shortly after that, I came to the decision that we should expand the project to include all MIA-related wrecks in Kwajalein lagoon, not just the Kingfisher. I approached Mike Woundy, the commander of Post 44, and together we drafted the subcommittee outline for the project.

2. How many finds have you made and how many possibilities are you looking at?
In all, we have discovered the crash sites of three planes that account for four MIAs between them, as follows:
*PBM-3D ‘Mariner,’ found in August 2009, Lt. j.g. Wilburne E. Piercy
*F6F-3 ‘Hellcat,’ found in October 2011, Ensign John R. Clem
*PB2Y-5R ‘Coronado,’ found in 2010 but not verified until October 2015, Lt. Harold A. Bowman and Lt. Cmdr. Samuel O. Givens
We have seven plane wrecks left to find, to account for the other eight MIAs who may be in the wrecks of those planes.

3. Do you intend to try to keep this project going until everything has been recovered? If so, what do you see as the biggest obstacles to that?
Absolutely we plan to keep this going. We will do so until DPAA [Defense POW/MIA Accounting Agency] comes in and inspects the sites to determine if any remains are there and recoverable. Our biggest obstacle is a common one – funding. But we are trying to address that via local fundraisers, crowdfunding, and trying to find a CONUS-based 501(c)(3) we can partner up with for fundraising purposes. We are unable to obtain our own 501(c)(3) tax number because we are on an overseas military installation.

4. What advice would you give other FODPAL posts that think they might like to try something like this?
What they need to think about is what they want to do – are they looking for underwater crash sites, or terrestrial MIAs? If underwater, they’re going to need equipment such as side-scan sonar, someone who knows how to operate it and interpret the imaging, and (of course) trained divers.
If your intent is to search for terrestrial MIAs, you’ll need to research what the laws and regulations are pertaining to conducting searches of those types and what to do when/if something is found. It’s important that when a site is found, the location remains a strictly-guarded secret so it’s not disturbed before a properly trained team is sent in to excavate the site.
They also need to open a dialogue with DPAA and stay in close touch with them during their efforts. There are numerous laws and regulations that pertain to gravesites, and close cooperation with DPAA will ensure those laws are not violated. There may also be additional local laws and regulations depending on where they are at, so it’s important to research any and all laws that pertain to what they want to do.
Funding could well be an issue, so the best thing to do there is try to find a CONUS-based organization to partner up with for tax purposes so you can use their nonprofit 501(c)(3) number for fundraising.
And it’s also very important and helpful to get a representative on the team from the local government to act as a liaison. That can aid greatly in removing potential obstacles, and it forms a partnership with the host country as well, which is also very important.