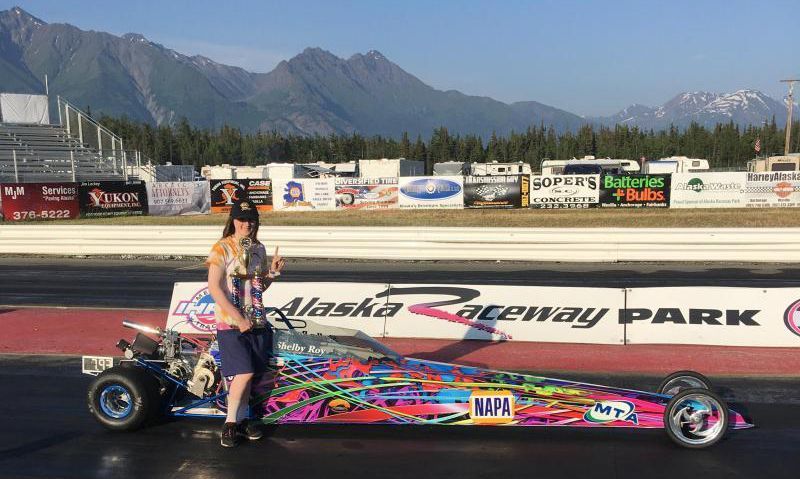 Shelby Roy after winning a race. (Photo via Legiontown)

American Legion Post 5 (Seward, Alaska) member Jeff Roy is 100 percent in support of his daughter Shelby. Shelby was supported by Post 5 as she participated in one of Alaska's fastest pastimes for kids, JR drag racing. It has been around since the '90s, and gives kids 8-17 the opportunity to race half-scale versions of the big dragsters you see at the big national events in a handicapped, bracket-style drag race contested over a 1/8-mile track. Kids can go as fast as their license allows, but no JR can go faster than 85 mph or 7.90 et.

Shelby had a great season this year, advancing to 5 final rounds with 4 wins, one of those being the big Independence Day weekend race, where she swept both points races and finished the season off in 2nd overall here in Alaska. In the 4 years she's been racing, she's advanced to 14 final rounds with 11 wins, a points championship, an IHRA Iron Man Race of Champions win, and got to represent Alaska at the World Finals held in Memphis, Tenn., in 2017. She has also competed at Bristol, Tenn., Rockingham Dragway in North Carolina, and I64 Motorplex in Owingsville, Ky. (where she advanced to the final round) and they plan on racing Rockingham again this winter as well as hoping to squeeze in a race at the Strip at Las Vegas Motor Speedway.

Jeff gives a big shout out to American Legion Post 5 in Seward for helping an Alaskan kid pursue her dreams, and thanks for all you do for our entire community.