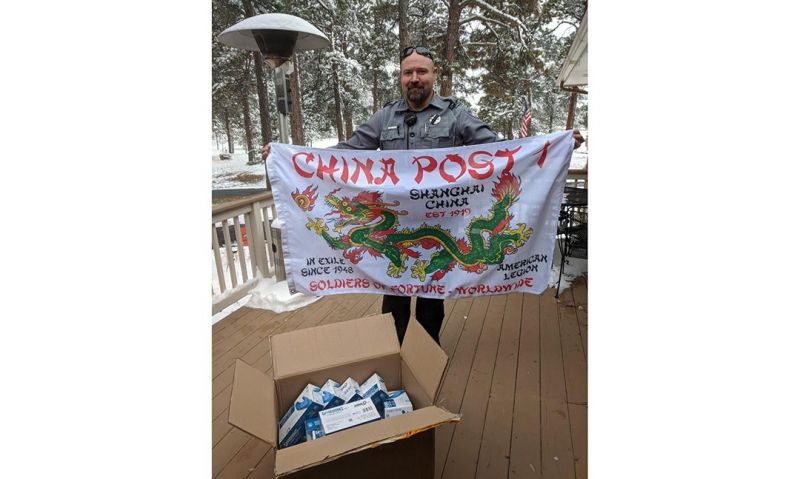 The position of Generals Ward & Chennault & Lt. Helseth American Legion China Post 1 has been unique in the organization for decades. But that hasn’t stopped them from collecting and distributing medical supplies to health-care workers, first responders and more – and, in fact, has been rather an advantage.

The post was founded in 1919 in Shanghai, and met at the American Club. But since 1948, China Post 1 has operated “in exile.” The long history of the post and its journey can be read here. According to Post Commander Scott Riebel, Post 1 currently boasts 1,265 members in 55 countries and almost all 50 states. “We draw in those people who would otherwise not have a post,” he says.

In a mid-April email, Riebel laid out how Post 1 members have responded to the COVID-19 emergency: “So far we have distributed more than 10,000 latex gloves, 1,500 face shields, gallons of hand sanitizer, N95 and KN95 masks, and surgical gowns to our military men and women, fire departments, police departments, sheriff departments, ER and ICU doctors and nurses, senior nursing homes, Red Cross, Project C.U.R.E., etc.” The post pays for the supplies, and has them shipped to wherever there are post members to distribute them. Their efforts are ongoing.

Post 1 has found significant savings through its connections within China, where many of these items are produced. These have allowed the post to purchase at cost directly from the manufacturing facilities, without middlemen or redundant layers. This “good working relationship with 'counterparts,'” as Riebel puts it, is the result of the post’s ongoing effort to get back into Shanghai and its old building. “We have hot and cold days,” he adds, but they have an ally in a granddaughter of one of the post’s namesakes, World War II hero Gen. Claire L. Chennault. Nell Calloway is president and CEO of the Chennault Aviation & Military Museum in Louisiana. Chennault’s memory is held in high regard in China, which gives Calloway – and Post 1 – cachet to further the relationship.

Riebel admits, “One of the biggest challenges is keeping people in contact and invested.” The post encourages this through newsletters (called the “Poop Sheet”), social media, a website and a yearly reunion. But he has nothing but praise for the “outstanding membership body” of China Post 1, who are proving that Legionnaires can keep serving their communities, states and nation/s wherever they are. The location may vary, but the stuff remains the same.