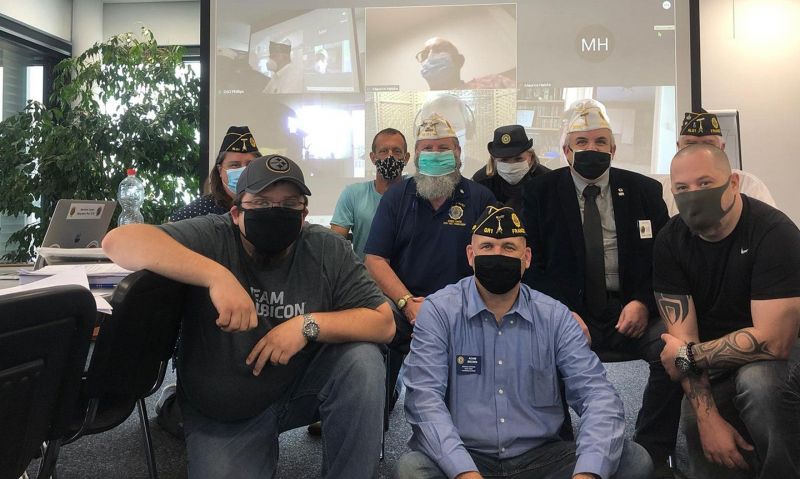 Participants - physical and virtual - of the PSO training session. (Photo via Frank Phillips)

The American Legion Department of France includes posts in more than 10 countries in Europe and Asia. With such a far-flung membership, activities like post service officer (PSO) training could be complicated even before the global COVID-19 pandemic hit this spring. But the work of The American Legion has gone on, including helping veterans with their claims.

At the end of August, Department of France Service Officer Frank Phillips conducted a full-day PSO training attended both in-person and virtually by service officers from Greece and Thailand to Ireland and England. It was the second event put on by Phillips, an Army veteran who took over the department job in 2017 as a volunteer and immediately started building it up. He works out of Garrison USAG Ansbach in Germany, and belongs to American Legion Post 1982 in Ansbach. He cites the garrison as a source of support and resources. [And in his capacity as a service officer overseas, he encourages VA health-care participants planning to start traveling abroad again to look into the agency’s Foreign Medical Program before leaving.]

“It’s a very important job over here, being an accredited service officer,” Phillips says. His work has led to a deluge of claims cases from around the world; “Our reputation is spreading like wildfire.” Some of the veterans he has assisted later became PUFL Legion members. More cases necessitate more service officers, hence the training session. Phillips himself had attended Department Service Officer School during the Washington Conference at the end of February, as the pandemic was expanding globally; the borders closed the day after he returned to Europe. But the time and energy is worth it – “They’re really appreciative that we have someone who will help them with their claims.”