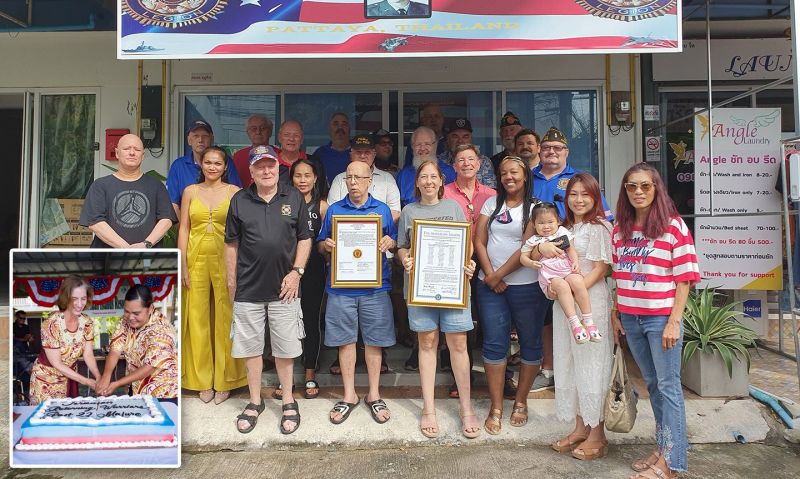 According to Post 0022 member Helkena Anni, residents of the Marshall Islands have been part of the U.S. Armed Forces for decades, starting as scouts in World War I before the islands came under U.S. authority after World War II. More than 500 Marshallese have served. The December induction ceremony featured community members, family members and a number of dignitaries that included the U.S. ambassador to the Marshall Islands. Richard B. Anderson American Legion Post 0044 (of Kwajalein, Marshall Islands, an hour’s flight away) Commander Dan Farnham represented the Department of Hawaii to hand things over to Post 0022 Commander Pamela Rubon.

Rubon says the post has been in development for more than seven years: “Our senior veterans have been fighting to get it but there's always something missing, needed, not agreed on, different leaderships, so requests always go back to the starting point all over again.” A main impetus is getting resources – and attention – to native U.S. military veterans in their part of the world: “We do have veterans out here who served and returned to their home lands with no medical access and benefits from VA, as we do not have facilities or any military facilities or VA or medical places that understand what we all went through. We don't even have any VSO out here.” The post has around 40 members, some in the United States. Its members are busy continuing the process of standing up the post, after which an early priority is getting a VSO trained to start helping area veterans. “As for the communities,” Rubon adds, “we have many plans to get ourselves involved and helping troubled youths, and also get involved with health awareness for better living such as exercise, as we have high rates of diabetes and other medical problems with our communities.”

Michael J. Chitwood is adjutant and finance officer of Post TH02. He says the impetus for the post began in the communities of ex-military advisers, contractors and family members that grow up around overseas U.S. military installations. A group of “expats” that included post commander William Martin Ahlberg made their way from Osan Air Base in South Korea to Pattaya. Ahlberg was looking for a way to honor his brother Thomas, who was killed in action in Vietnam. A perceived need by veterans in their community led to an idea to do just that – with a Legion post. “Although it is the nature of most expats to assist other expats, there was a particular need for an organization whose purpose is the unique needs of all U.S. veterans,” Chitwood says.

Post TH02 (with Ahlberg’s brother as namesake) had 43 charter members, and has added more since then. The post’s journey began in late 2019, but circumstances pushed back the final establishment: “Initially there was a lot of momentum in forming the post and getting it up and running. Then Thailand went into lockdown.” When restrictions eased in mid-June 2020, the activities of the steering committee resumed.

The American Legion’s century-plus of history and advocacy “is a driving force with the post,” Chitwood says. “As Thailand is one of the most desirable locations for expats to retire in, this establishes our post to be uniquely posed to assist our veterans. As we are geographically separated from the support normally offered to our veterans and expats, it will be the goal to bridge that gap.” And the post “has already participated in several events formed with both The American Legion, VFW and other foreign veteran organizations to represent veterans before the community in a positive way.”