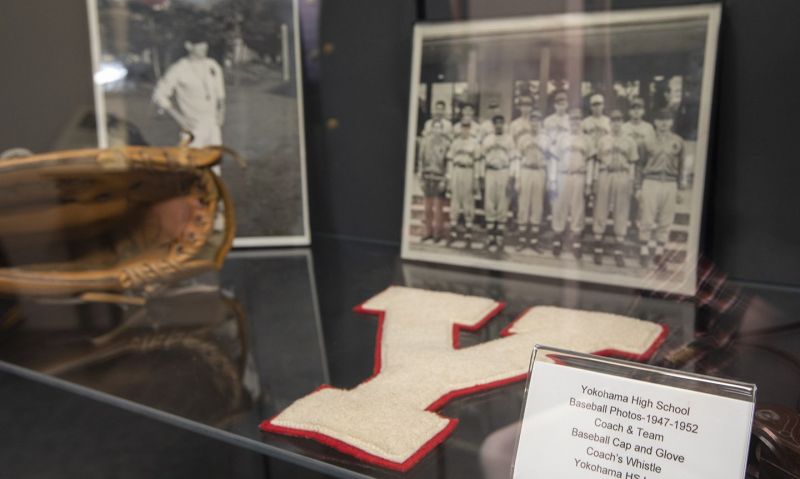 Memorabilia, like these items from Yokohama High School in the 1940s, were on display during the opening ceremony of the American Overseas Schools Historical Society Museum in Wichita, Kan., on Thursday, April 15, 2021. Photo by Travis Heying

The Delano district of Wichita, Kan., is full of history and future alike. It served as an R&R destination for cowboys driving cattle along the Chisholm Trail in the 1800s. Today, it is blossoming into a modern destination for new residents, tourists and shoppers. That nexus is what makes the district well suited for the American Overseas Schools Historical Society Museum, which opened to the public April 15.

The American Overseas Schools Historical Society (AOSHS) was founded in 1978 as a way to draw attention to the history of Department of Defense Dependents Schools (DoDDS), established in their current incarnation just after World War II. (The Department of War oversaw military schools established in the Panama Canal area in the 1900s, the Philippines in 1918 and Cuba in the 1930s.) The group was founded by former DoDDS educator Dr. Thomas Drysdale, and many past and present board members were educators as well.

The society’s primary mission is to “collect, record, maintain and preserve” the memories – and memorabilia – of the schools, that at various times could be found in more than 42 countries.

At the museum’s opening ceremony, AOSHS Historian Rebecca Dunn recounted that 33,000 pounds of material was transported from Arizona to Wichita in 1999 during a series of moves that at one point found the items and artifacts in Drysdale’s basement before a building was secured. A more current measurement is 50,000 pounds. Materials include everything from cheerleading outfits to thank-you letters from the White House, trophies and yearbooks, all of which are being digitized into a parallel collection accessible from the AOSHS website.

Joel Hansen is head of membership and development for AOSHS. A past administrator, he says a common understanding is that the schools “were frequently a place of stability for the children and family members left behind when the military member deployed.”

Teachers and other school officials, in a very real sense, were helping support the mission by doing their jobs. And that put them in the middle of history – a pre-opening board dinner featured reminiscences of everything from seeing the effects on German society after the fall of the Berlin Wall and reunification, to U.S. soldiers on top of school roofs with guns after 9/11. During the Vietnam War, former board president Dr. Ann Bamberger helped a general’s daughter write a thank-you note to an ambassador for a birthday present.

When DoD schools topped standardized test scores in the 1990s, Bamberger says the initial reaction of the educational community was surprise. She attributes the success to “teacher expectations … we walked in and believed those kids could learn,” as well as support from parents who had to learn and develop themselves to advance in their military careers. The schools were as much like U.S. schools as they could be, with sports teams (traveling to other countries to compete), after-school activities and field trips (such as art classes going to the Louvre in Paris). But local atmosphere and regional aesthetics made their way in, as can be seen in memorabilia like trophies.

AOSHS President Linda Connelly spent 32 years in the DoDDS system, teaching around the world. Before that, she taught at a Catholic school in Illinois. Looking back, the biggest difference she found was the global perspective. The Illinois students “have no clue of the sacrifices the military makes,” from missing holidays to frequent moves. Hansen says that in a typical year, one third of a school’s students would be new. And yet, she adds, “kids are kids.”

Frank Roehl is a 48-year veteran of overseas education, a significant amount of that time spent as a superintendent. He is social media chair for the AOSHS board, and a Paid Up for Life member currently with Rufus McLaughlin American Legion Post 177 in Southern Pines, N.C. He himself was a “brat” (one definition spells out the acronym as “British Regiment Attached Traveler”), who spent time in both military and civilian schools. In some locations, he says, “It was amazing to me how little my classmates had traveled and how disinterested they were in the world as a whole. My fellow brats and I tended to stick together, especially if we lived on base.”

After his education, Roehl joined the Army. While waiting for some friends during a leave in Germany in 1970, he started substituting and coaching soccer at a high school “to fill the time.” That fall, he was offered a full-time position “and as they say, the rest is history.” His time as both a student and servicemember informed his coaching – with its emphasis on structure and teamwork – and “my own experiences with multiple moves and having Dad away helped me relate to the students.” He worked with several American Legion posts in Germany on oratorical contests and scholarship programs. He and wife Margy, also a former teacher and information specialist, raised their children in the German DoD schools where they worked; friends came and went.

Roehl is one of an unknown – but likely significant – group of Legionnaires who are multi-generational military families: the children of military parents and parents of military children.

He encourages American Legion Family members to check out the AOSHS website and digital collection. “Being able to access the collection,” he says, “allows them to reconnect with those forgotten places and shared times with schoolmates and family friends … Especially now with the reduction of our military assigned overseas, many of the places where we had schools are closed. The museum provides tangible artifacts to connect memories both individual and collective.” And he concurs with Hansen that the schools, and those who staffed them, played their part in the mission: “Our logistics of the support to servicemembers and their families to provide a semblance of home while stationed overseas is a demonstration of our commitment to the servicemembers, as well as our allies, in support of freedom. The museum is a physical reminder of that commitment.”

The museum is currently open to the public on a limited basis; call (316) 265-6837 or visit aoshs.org for the latest information. Memberships in AOSHS are $25 per year; visit aoshs.org/membership to learn more.

You can share your experiences in overseas military schools on the Legiontown blog site, in the Family Legacy category.