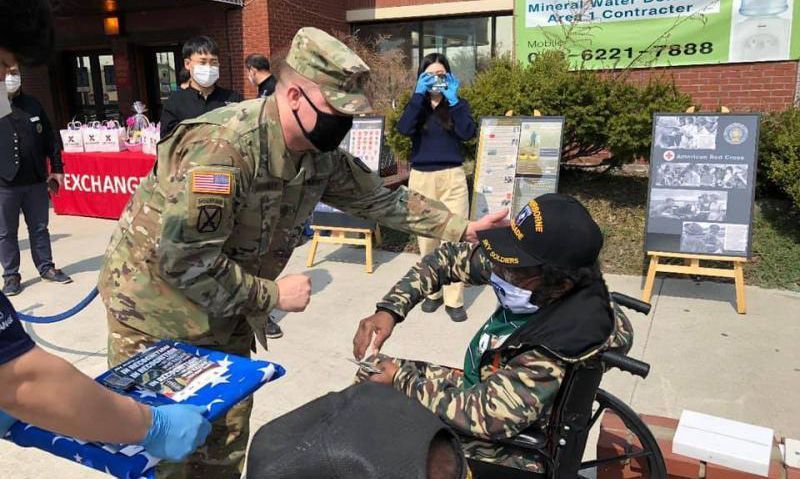 During the Vietnam War Veterans Day ceremony conducted at Camp Casey Plaza, Korea, on March 25, 2021, Legionnaires of Lewis L. Millet Post 38 were awarded the Vietnam Veteran lapel pin. Albert Deloney, a charter member of Post 38, was given permission to attend by the medical staff of his nursing home. Deloney, sitting in his wheelchair, was presented the pin by Command Sgt. Maj. Jason Hathaway, who presided over the event. Pins were also presented to Legionnaires David Hill and Gasper Delise.

The Vietnam Veteran lapel pin is a "A Lasting Memento of the Nation's Thanks" for living U.S. veterans who served on active duty in the U.S. Armed Forces at any time during the period of Nov. 1, 1955, to May 15, 1975, regardless of location. Throughout National Vietnam War Veterans Day, we recognize the service and duty rendered by all servicemen and women of this era.

In 2012, President Barack Obama signed a presidential proclamation, designating March 29 as the annual observance of Vietnam War Veterans Day. The signing of the proclamation marked the 50th anniversary of the departure of the last American troops from Vietnam – March 29, 1973.

U.S. Sens. Pat Toomey, R-Pa., and Joe Donnelly, D-Ind., introduced legislation in 2017 to honor Vietnam veterans with a day. They chose the anniversary of the withdrawal of military units from South Vietnam. President Donald Trump signed the National Vietnam War Veterans Day Act on March 28, 2017, calling for U.S. flags to be flown on March 29 for those who served.